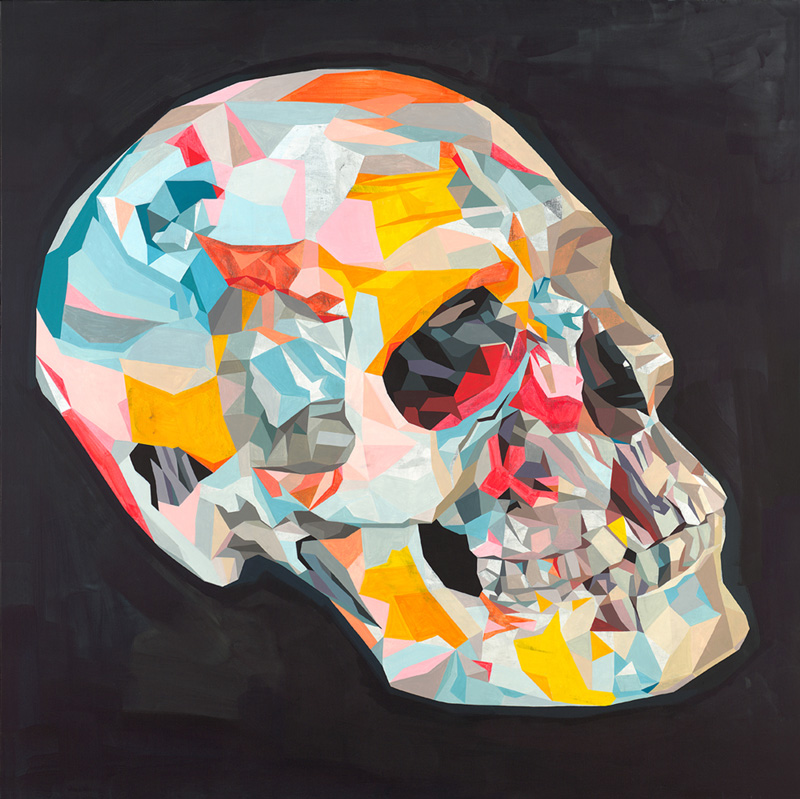 On 20 September, Antonio Colombo kicks of the new season with a solo show by the famous artist Tim Biskup, at his first exhibition in Italy.

Tim Biskup says about his new solo show, Excavation:
“This exhibition may appear to focus on themes of life, death and spirituality, but that is not what it’s really about. These are works of meditative practice. Finding the balance between my conscious aesthetic choices and the unpredictable nature of improvisational gestures requires a level of attention and presence that I have, until this series of work, never approached. I had a sort of revelation when I stood in front of the work of William De Kooning at NYC MOMA in November of 2011. There is a sense of pure translation of his humanity onto canvas in his lines. I could feel his pain, his joy and his longing for the image that fluttered through his head. It was a reminder of who I am, what I love about art and how the constant pressure of creative impulse must be respected and obeyed. It was in the spirit of his practice that I set out to make work for this show. Accordingly, the title of this exhibition comes, with all due respect, from his work of the same name.
My natural starting point for this was in abstraction. It is where my purest lines are. My style and personality are free and intense when I throw everything else away. Abstract drawing and painting reminds me of my identity and prepares me to approach figurative imagery.
The first image that emerged was, of course, a human skull. For as long as I can remember, I have been obsessed with the image of the human skull. Clearly, I am not the only one who feels this way. Perhaps it is the complex and elegant geometry and pure aesthetic balance of the object. More likely our attraction comes from our guts and not our eyes. The skull is ourselves stripped of life. It is a clear reminder of our mortality. It can be a brutal and unnerving signpost that stares us down and fills us with dread, but at best it brings us into the present and reminds us to appreciate our lives.
The images that followed were of women. This is not merely a tip of the hat to De Kooning’s work but also to the controversy that he faced when the public was confronted by his depictions of women. This is not to imply that he was always misunderstood. He was going to his natural place of interest and expressing something that even he could not completely grasp. That has been my goal for this work. To find the core of my artistic identity and express it as naturally as possible. It is unnervingly personal. Perhaps it is about life, death and spirituality after all.”

Born in 1967 in Santa Monica, Biskup lives in Southern California and embodies its lifestyle and aesthetic sensibilities. Though academically trained, he interrupted that path early on, in 1988, leaving the Otis School, rejecting traditional art and concentrating on the Punk music scene and the charms of Disney cartoons. He learned techniques of animation, illustration, graphics and industrial design, developing an intentionally pop language. Besides painting, he produces multiples, prints, toys, books and images for rock concerts.
Considered one of the leading exponents of the Lowbrow current, he represents its theoretical and perhaps less immediate aspects. He has had shows with various artists from the group, including Gary Baseman and Mark Ryden, in its galleries of reference like La Luz de Jesus.
In the last few years, Tim Biskup work underwent what was mainly a stylistic change, the artist has developed a very personal technique of polygons and facets, making the paintings more precise, cleaner, without brushstrokes or curved lines, a very “sterile and severe” kind of painting that reflects his need to make his work a sort of meditation, or a mathematical process.
His new paintings are completely abstract, while others are based on his photographs or on images taken from films. He calls himself a new Abstract Expressionist, though he does not completely avoid subjects, especially women, animals and skulls; above all, he says he can never get enough of the latter. For Biskup, skulls are icons charged with intensity, and closely linked to his personal background (horror films, punk rock, religion, mysticism, science).

Biskup. From the underground to the museum