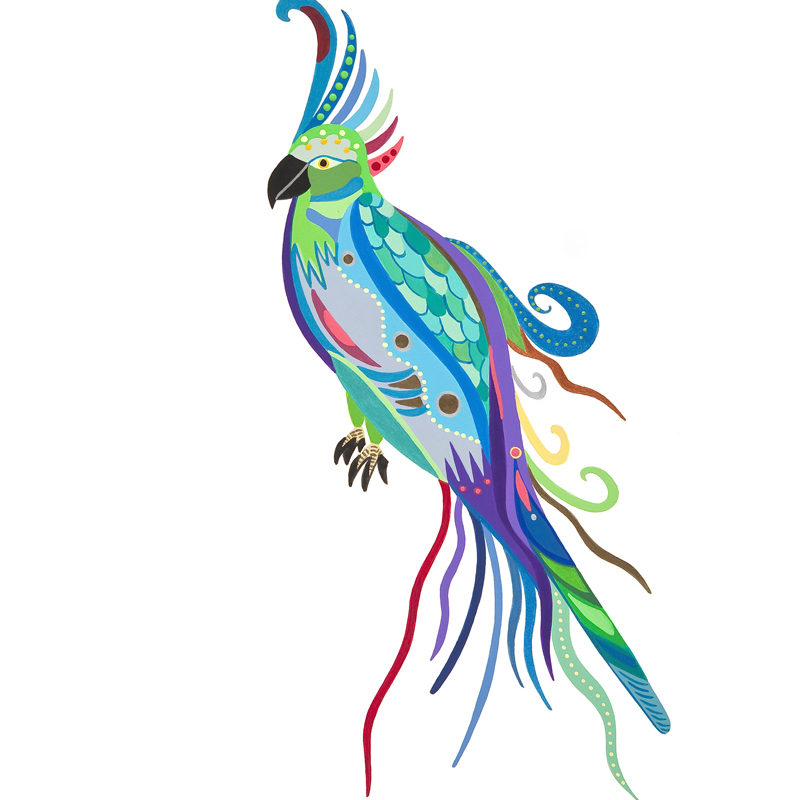 The artist will show a mandala, a refined painted kaleidoscope, a coloured wood sculpture, two luxuriant small parrots and a series of portraits dedicated to the world of music.

Fulvia Mendini’s work seems like a kaleidoscope. The observer’s view will always meet something different, unusual. The shape’s composition of her work is always opened by new patterns to be, as her formal style is giving birth to an original, variable and ongoing process of shaping, which, like a kaleidoscope, results fascinating for infinities compositions. Mandala, flowers, animals, portraits, decorations are being put together by shaping themselves always in a different way, their visions are astonishing and enchanting.

Fulvia Mendini was born in Milan, where lives and works. After her graduation in Graphic Design and Illustration, Fulvia has worked at Mendini’s Atelier where collaborated with other companies. Once she started her painting and decorating research, she focused on the world of nature and portraits. She has exhibited at Grand Palais of Paris, at the International Expo of Taejon in Korea and at the Milano’s Triennale. Her work has been shown at Luis Adelantado a Valencia, Antonio Colombo Arte Contemporanea, Angel Art and spazio Etro in Milan, San Salvatore in Modena, Delle Battaglie in Brescia, Byblos Art Gallery in Verona, Roberta Lietti Arte Contemporanea in Como and at the Armory Art Gallery in Perugia. In 2009 she attended the Biennale in Prague. Chiara Canali, Lorenzo Canova, Mauro Corradini, Raffaella Guidobono, Fulvio Irace, Norma Mangione, Loredana Parmesani, Ivan Quaroni and Alessandro Riva wrote about her work. She has worked for Vietri creating ceramics. Furthermore, she has designed a bag collection for Yoox, for witch designs jewels too. Her works are present at Byblos Art Hotel permanent collection in Verona. The new Naples underground stations, projected by Atelier Medini, have also some of her mosaic works.