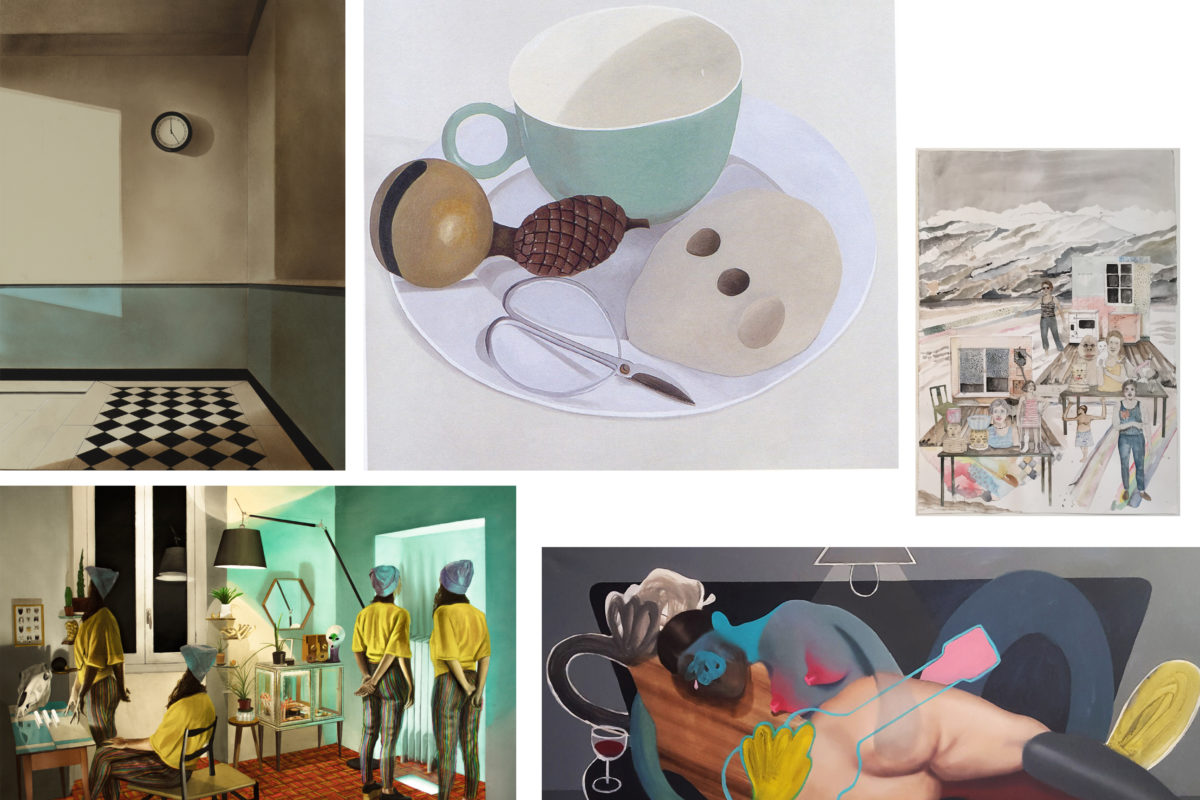 Antonio Colombo Arte Contemporanea is proud to present the group exhibition Specie Di Spazi (Species Of Spaces), which investigates the theme of the house and the domestic interiors as a theater of everyday life and its normality.

The title of the show is inspired by the well-known essay by Georges Perec written in 1974 in which the author describes the concept of space. According to him, «the space that houses the objects becomes the protagonist as the only guarantor of the order of the world, the only restriction set by the writer to the uncontrolled deployment of chaos», because in Perec’s book the questioning of the infra-ordinary isn’t limited to the observation and description of the objects in space, but is also a review of the gestures, habits and rituals that distinguish the individual in space.

Several points of view, transverse gazes and different interpretations on a subject that seems so ordinary, but that in the end is more complex than one might imagine, are compared in this exhibition.

Ten artists that have recently – or in in the past – worked on this theme have been gathered together: Arduino Cantafora, Marco Cingolani, Nathalie Du Pasquier, Massimo Giacon, Lusesita, Dario Maglionico,  Alessandro Mendini, Fulvia Mendini, Erika Nordqvist, Giuliano Sale.

As Perec writes, space needs limits, boundaries, and only in this way it will be possible to identify and recognize it, and therefore the subject of the interior and the interiors, in the works on show, is intended both as a collected, confined physical space, intended for the intimacy of forms and relations, and as a place for reflection and observation, which in some cases focuses on individual objects and in other cases on suspended atmospheres, but also as an indefinite mental space with an inside and an outside, or a before and an after, which seem like interchangeable categories, with references to dreams and memories, recollections and space-time stratifications.

On show: works on canvas, drawings (large-format as well) and sculptures.

Arduino Cantafora, born in Milan in 1945. Lives and works in Lausanne, Switzerland.

Architect, professor of Architecture at the Federal Polytechnic School of Lausanne and at the Academy of Architecture of Mendrisio, he’s one of the few Italians to have been invited as a “Visiting Professor” to Yale University.

Cantafora’s career has few comparisons for the excellence of the results achieved. An only partial list includes solo exhibitions at the Milan Triennale, in 1973 and again in the 1980 and 1984 editions. In 1980 he participated in the Venice Biennale, both in the Architecture section and in the Visual Arts section, in 1982 at the Alcazar in Seville, in 1984 at the Martin Gropius Bau in Berlin, in 1990 at Palazzo Reale in Milan and in 1994 at the Pompidou Center in Paris.

The international recognition of the quality of his work is also well demonstrated by the recent acquisition by the National Museum of Modern Art (MNAM) of the Center Pompidou in Paris of about sixty works for their permanent collection.

Marco Cingolani’s painting explores the theme of the humanity in different contexts, such as history, news and religion, with the will to testify the social and cultural transformations taking place. His is a painting of facts, memory and participation, in which the scenarios presented assume a symbolic dimension, loaded, in the recent years, with a straightforwardly colorist research, where figures and recognizable shapes leave space to a language with an abstract imprint. After the disappearance of the image and its narrative substrate, in fact, the layers and the chromatic superimpositions take over.

Among several group expositions, Marco Cingolani has solo shows at the Pecci Museum in Prato, at the National Museum of Villa Guinigi (Lucca), at Palazzo Strozzi in Florence, at the S.M.A.K. in Gent, and finally in Milan, at the PAC Museum.

Nathalie Du Pasquier was born in Bordeaux, France, in 1957. She lives and works in Milan since 1979.

Until 1986 she worked as a designer, specializing on the decorated surface. She was a founding member of Memphis group for which she has designed many fabrics, carpets, furniture and objects.

When the group broke up in 1987, painting became her main activity, save for a few exceptions in the fields of ceramics and textiles.

In addition to design shows, in which she participated with and without Memphis, she regularly exhibits her paintings in internationally-known galleries, both in Italy and abroad, and in prestigious museums. Among the most recent shows: those at the Kunsthalle in Vienna, at the Kunsthalle Lissabon in Lisbon, at the Institute of Contemporary Art of Philadelphia, at the Camden Arts Center in London, at the International Center of Graphic Arts in Ljubljana.

Massimo Giacon since 1980 divides his time among his various activities as a cartoonist, illustrator, designer, artist and musician.

Protagonist since the early Eighties as a cartoonist of the phenomenon of renewal of Italian comics born from magazines such as Frigidaire, Alter, Dolce Vita, Cyborg and Nova Express. He began working in 1985 with Sottsass Associati. He continues his activity in design by collaborating with Matteo Thun, Atelier Mendini, Sieger Design and realizing projects for Memphis, Alessi, Philips, Zero Design, Swatch and Artemide. In 1990 he began an artistic activity that brought him to hold numerous exhibitions in Italy, Switzerland, the United States, Greece, Portugal and Japan.

Lusesita (Laura Lasheras) was born in Calahorra (Spain) in 1979. Since 2004 she lives and works in Barcelona.

She studied Art at the University of Logroño, then specialized in ceramics at the School of Arts and Crafts of Zaragoza. The works of Lusesita take shape thanks to a great manual ability, without ever abandoning her playful and casual approach, which allows her to experiment not only with the primary material of her works, ceramics, but also to mix it with other materials, such as fabrics.

Dario Maglionico was born in Naples in 1986. He graduated in Biomedical Engineering at the Politecnico di Milano and from 2014 he lives and works in Milan, dedicating himself exclusively to painting.

The house is the place where Dario Maglionico’s pictorial visions are articulated. Through perspective multiplication of points of view and the partial replication of figures and objects, he documents the synaesthetic origin of perceptive processes and those concerning the formation of memories. He was recently selected among the finalists of the VAF Foundation Award and his works have been exhibited at the Mart in Rovereto.

Alessandro Mendini was born in 1931 in Milan. After graduating as an architect, he was made an honorary member of the Bezalel Jerusalem Academy of Arts and Design. He was awarded the Compasso d’Oro for Design (1979 – 1981 – 2014), he’s a “Chevalier des Arts et des Lettres” in France, he was awarded the Architectural League of New York and the Degree Honoris Causa at the Politecnico di Milano and at the École Normale Supérieure de Cachan in France. He was a honorary professor at the Academic Council of Guangzhou Academy of Fine Arts in China. In 2015 he was awarded the European Prize for Architecture 2014 in Chicago, the Honorary Degree from the Academy of Fine Arts in Wroclaw in Poland and from the KMU University – Kookmin University in Seoul in Korea, and became Mestre de Design at the FAD in Barcelona in Spain. He directed the magazines ”Casabella” (1970-1976), “Modo” (1977-1981) and “Domus” (1980-1985; 2010-2011). He was one of the founders of Global Tools and Domus Academy.

His works can be found in various museums and private collections.

Fulvia Mendini was born in Milan in 1966, where she lives and works.

After studying Illustration and Graphics at the European Design Institute, she worked at the Atelier Mendini, collaborating with various brands. Later she began a personal pictorial and decorative research, focusing in particular on the world of nature and portraiture. A versatile artist, Mendini has collaborated with artisans and companies, creating ceramics, sculptures, carpets, murals, jewels and bags. Her painting, rich in cultured references, is the result of a refined combination of artistic and graphic styles.

Erika Nordqvist, born (1975) and raised in northern Sweden, began her artistic studies in England, first at the Arts Institute of Bournemouth, then at the Slade School of Art in London.

The creative process that distinguishes her works is always visible, at every stage, on the white sheet: the initial state of uncertainty, marked by evident erasures, soon leaves space to increasingly confident marks, as if the artist was able to acquire consciousness of the world only by drawing it.

Giuliano Sale was born in Cagliari in 1977. He lives and works in Milan.

He’s a painter full of doubts, who investigates the psychological dimension of portraiture, highlighting the disorientation and the moral uncertainty of his subjects through a fragmentation of their physiognomic features. Far from trends, rigorous but at the same time irreverent and caustic, Sale explores the ambiguities of our time with a fluid and magmatic language in which the chaotic elements of post-Cubist grammar acquire a dramatic tension never seen before.