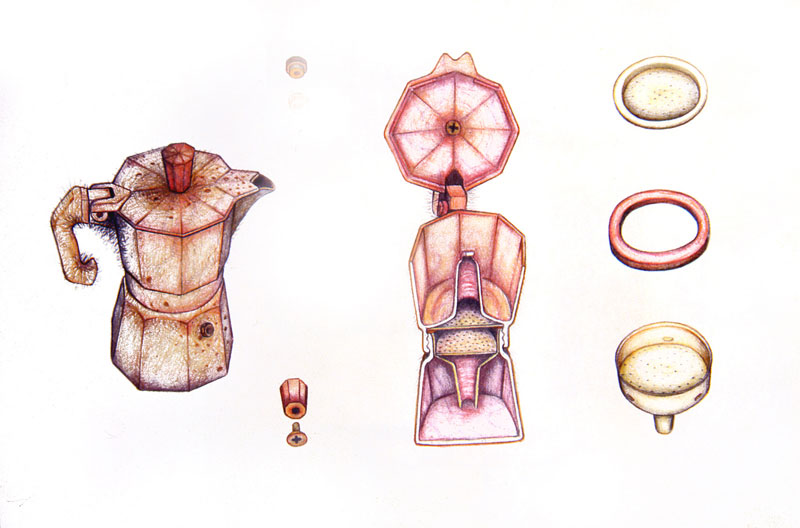 On Thursday 18 November Antonio Colombo Arte Contemporanea opens a solo show by Simone Racheli, entitled Anatomica Colf (anatomical home-help).
The exhibition, curated by Raffaele Gavarro, includes a series of drawings, sculptures, objects and installations that describe a domestic environment subjected to the transforming effects of the imagination.
The presences range from a washing machine with an altered housing, the work that gives the show its name, in which the window becomes a rotating iris, to Ricominciamo (Let’s start again), an installation formed by household objects that have been destroyed and put back together with glue and wire. Cuts in the wall reveal the wiring-guts that run invisibly below the surface, reinforcing the domestic shell, while Resistenza (Resistance), a small table that continues to stand, perfectly, though three of its four legs have been sawn off, becomes the visual paradigm of absurd, unpredictable everyday balances.
Of course the “home” must have its television set. In this case it broadcasts a video showing drops of water falling into a pool, which turns out to be an interior view of a toilet. The drops punctuate the autobiographical tale of an immigrant woman.
Born in Florence in 1966, Simone Racheli, who lived in Rome for several years before moving to Parma, uses sculpture in increasingly sophisticated ways involving extraordinary qualities of imitation of reality. Especially in Anatomica Colf, the staging of these works, contaminated by different languages, takes on great narrative power and complexity.
The exhibition is accompanied by a catalogue with a text by the curator.