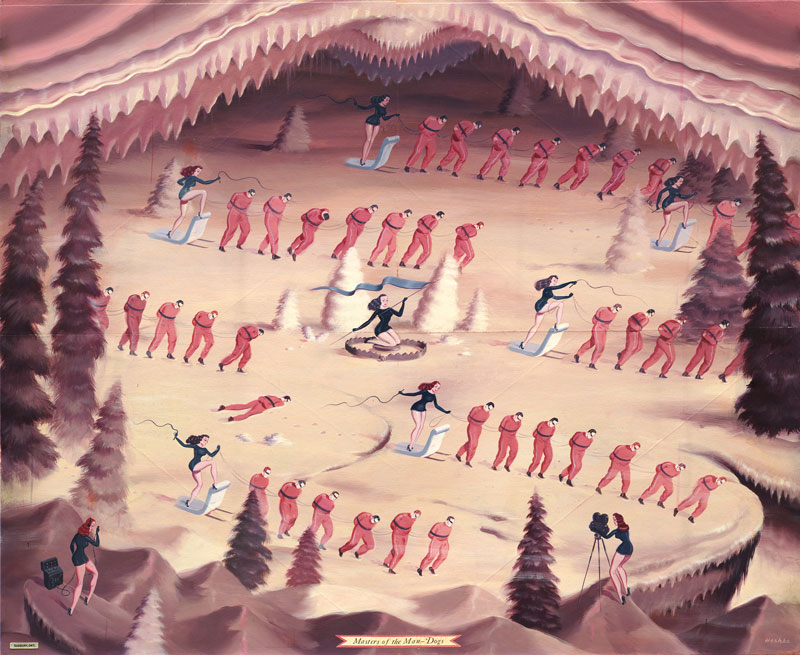 Antonio Colombo Arte Contemporanea is proud to present Romance of Canada, the third Italian solo show by Ryan Heshka, a Canadian artist born in Winnipeg (Manitoba), who recoups the language of comics, illustrations and B-movies of the 1930s and 1950s, through fantastic, dreamy paintings filled with pin-ups, superheroes, robots and alien monsters that seem to have emerged from the pages of an old pulp magazine.
For Romance of Canada Heshka turns to Canadian clichés and stereotypes, attempting to construct an original image of his nation, balanced between reality and fiction, past and future.
Heshka’s viewpoint is the personal, autobiographical position of a child that during the very long, very cold winter months is forced to spend time at home, drawing, playing, reading comics, watching science fiction films and shooting Super 8 movies, simply cultivating his own imagination. The artist blends his childhood memories with the image of a postcard Canada, a snowy land of evergreen forests and frozen lakes, the habitat of deer, beavers and legendary creatures like the Sasquatch, or Bigfoot (the mythical hominid).
The exhibition of about thirty works, including gouaches on paper, oil paintings and mixed media works on panels, has been conceived as a fantastic, fictional representation of this North American nation. Each painting makes reference to a specific city or place, or to aspects of the history and customs of the country, such as holidays, scenes of everyday life, but also crimes and sporting events.
In the construction of his imaginary Canada, balanced between history, folklore and science fiction, Heshka takes ironic stabs at the domestic clichés of the Maple Leaf, from the drama of the wives of hockey players (Canada’s national sport) forced to live in a condition of “widow-like” solitude, to the proverbial ranked structure of the armed forces, all the way to the many different meanings of the phrase “I’m sorry,” characteristic of the English spoken in the Great Lakes Region.
Romance of Canada is a new phase in the career of Ryan Heshka, in which his painting has become more painstaking and detailed, with a seductive range of colors, while introducing new iconographic themes, as in the case of the large flag painted on canvas, a tribute to the finest tradition of vintage large biology charts of animals.

Ryan Heshka was born in Manitoba, Canada in 1970. He lives and works in Vancouver, Canada.
He took a degree in interior design and worked in that sector for many years, also making animated films, before making art and illustration his main activity. His works are influenced by a lifelong love of comics (favorite artists include Jack Kirby, Bill Everett and Basil Wolverton), pulp magazines (Frank R. Paul), children’s books (Dr. Seuss), monster movies and B-movies (the films of Ray Harryhausen, King Kong, Dracula, etc), old advertisements and posters. All these sources have contributed to form his artistic style. As a child Heshka drew and used models (little cities made with cardboard) and Super 8 films to create his own world. His work has been included in the leading illustration annuals like American Illustration, Society of Illustrators, Communication Arts, 3 x 3, and Applied Arts. His clients include Vanity Fair, Wall Street Journal, New York Times, Playboy, Esquire, Forbes, Topps and Dreamworks SKG.
He has had shows in galleries in North America (including Roq La Rue, Seattle, WA; LA¸ Copro Nason, LA; Orbit Gallery, New Jersey; Rotofugi, Chicago) and Europe (Feinkunst Kruger, Germany; Antonio Colombo Arte Contemporanea, Italy), and his works have been featured many times in the magazine BLAB! and in books on the New Underground movement, such as The Upset (Gestalten Publishing). He has published the children’s books Welcome to Monster Town (Simply Read Books, 2007) and Welcome to Robot Town (Henry Holt & Co., 2013), which have been translated into several languages.