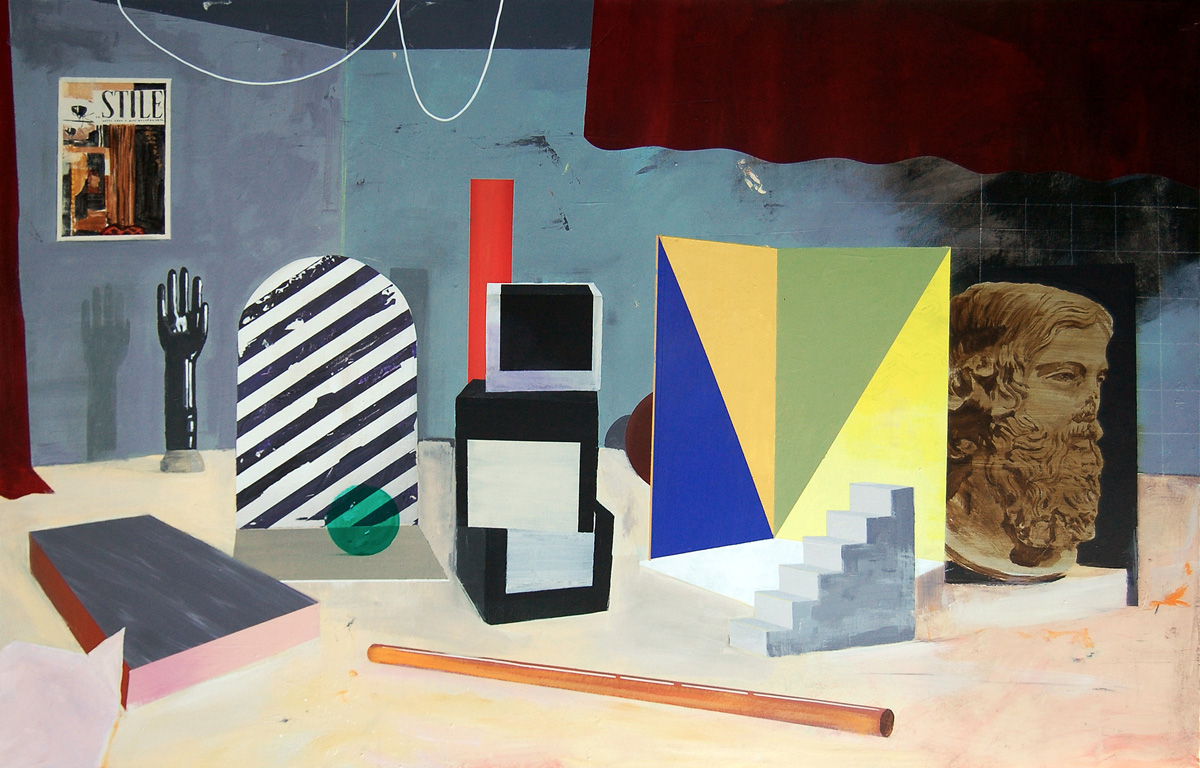 Antonio Colombo Arte Contemporanea is proud to present Someone, Somewhere (Qualcuno, Da Qualche Parte), the double solo show of the artists Giuliano Sale and Paolo De Biasi, curated by Ivan Quaroni. The exhibition includes recent works specifically made for the occasion by the two artists.

The show’s title, a partial translation of a famous song by the Scottish band Simple Minds (Someone, Somewhere In Summertime, 1982), alludes precisely to the two different iconographic obsessions that animate the research of Sale and De Biasi, that is the portrait and the space.

In fact, while Giuliano Sale iconoclastically reinterprets the face and the human body, inserting it in a fragmented and disordered virtual dimension, a pure mental projection of the different emotional states of the artist, Paolo De Biasi betrays his training as an architect focusing on the physical space and on the objects that inhabit it, setting up a personal theater of the memory, perspectically revised and updated, which is also a participating new interpretation of the innovative spirit of the Italian Twentieth Century.

Both reread the history of art adapting it to the urgencies and moods of the contemporary sensibility.

Giuliano Sale, for example, pretextually recovers shreds of the painting unconscious of Ingres, Matisse, Caravaggio and other masters, filtering them with a composite pictorial grammar, which alternates precision and gestures, construction and decomposition, ferocity and elegance in an original and unique language. Sale not only is inspired by the surrounding reality, but indeed also by historical paintings that he “brutalizes” through a decontextualization process and a readjustment to a new expressive range, distant from the classical concept of beauty.

For Paolo De Biasi painting is made up of composition, narrative, color, elements that can be composed in an infinite range of variations, as in rock, where the same chords, otherwise combined, are used by very different musicians. Thus, for example, Picasso is not Hockney, just like the Beatles are not the Smiths. De Biasi retrieves the figurative spirit of the early Twentieth Century, which most part of European contemporary painting looks up to, mixing the architectural and decorative style of architects such as Giò Ponti, Aldo Rossi and Gigiotti Zanini with the tradition of Carlo Carrà’s plastic values and De Chirico’s metaphysics, but also, indirectly, with the great art of the Middle Age and the Italian Renaissance.

GIULIANO SALE was born in Cagliari in 1977. He lives and works in Milan. After art school, he begins to participate in various exhibitions at local galleries and museums, becoming known for his irreverent painting, and at the same time he collaborates as a set designer with the theater Il Crogiuolo in Cagliari. In 2006 he is a finalist at the Celeste Prize. He begins a collaboration with the critic Ivan Quaroni, who invites him to several shows in Milan. In 2008 he takes part in the public exhibition Arrivi E Partenze at the Mole Vanvitelliana in Ancona, curated by Alberto Fiz and Walter Gasperoni. In the same year he participates in Allarmi 4 at the Caserma De Cristoforis in Como. In 2007 he is included in the book Laboratorio Italia by Ivan Quaroni, published by Johan & Levi. His purely figurative painting, close to the “new objectivity”, is obviously included in Ivan Quaroni’s project Italian Newbrow. With the group of the Milanese critic he takes part in the 2009’s Prague Biennial. In the same year he shows his paintings at the Biennale Giovani Del Serrone at Villa Reale in Monza. In 2009 the second issue of the monographic magazine Or Not, published by the Associazione Culturale Arsprima, is dedicated to his work. In 2010 he begins to collaborate with the Milanese gallery Antonio Colombo Arte Contemporanea, which exhibits his small show L’Oblio. After that, he participates in a group exhibition at the Promenade Gallery in Vlore, Albania, curated by Artan Shabani and Simone Mazzeto. In 2011 he shows his works at Antonio Colombo Arte Contemporanea   in the solo exhibition Biedermaier, L’Umanità Al Crepuscolo, curated by Ivan Quaroni. Also in 2011 he is on show at the regional pavilions of the Venice Biennial and is selected among the finalists of the Cairo Prize at the Museo Della Permanente in Milan. In 2015 he has a solo exhibition at the Irish gallery Mother’s Tankstation during Artissima, in Turin. In the same year an issue of the monographic magazine Solo, presented by AmC Collezione Coppola, is dedicated to his work. Antonio Colombo Arte Contemporanea promotes his art in the major Italian and international art fairs, such as Pulse New York 2016.

PAOLO DE BIASI was born in Feltre in 1966. He lives and works in Treviso.

Architect, student of Arduino Cantafora at the University of Venice, in 2012 he exhibits at the Architecture Biennial in Venice with the UP3 studio of Mogliano Veneto, to which he is associated.

He begins his career as a painter relatively late; after the final of the Celeste Prize, he comes in contact with Ivan Quaroni, who includes him in the original formation of the Italian Newbrow project, and after that a series of shows and publications always see him present with paintings and collages. In 2011 the movement Italian Newbrow and Paolo De Biasi are explicitly cited in the film I Soliti Idioti, played by the comic actors Fabrizio Biggio and Francesco Mandelli, and directed by Enrico Lando. He participates in national and international exhibitions, such as: the Prague Biennial (2009), the Maretti Prize at the Museo Pecci in Prato (2010), Impresa Painting at the CIAC in Genazzano (2010), Italian Newbrow at the Pinacoteca in Como (2012) and the Fortino in Forte Dei Marmi (2012), the Italy-China Biennial at the Villa Reale in Monza (2012) and the first edition of Dolomiti Contemporanee (2011). In 2011 he wins the national painting prize Paolo Parati. He was also a finalist at the Terna Prize, Celeste Prize (2007) and Arte Laguna Prize (2007), as well as a selected artist at the London International Creative Competition (2012).

He has shown with various galleries in Italy: Area/B in Milan, Carini And Donatini in San Giovanni Valdarno, Andrea Arte in Vicenza, Galleria Arte Flavio Stocco in Castelfranco Veneto, Antonio Colombo Arte Contemporanea in Milan, and with CCA&A Gallery of Hamburg both in Germany and Hungary.