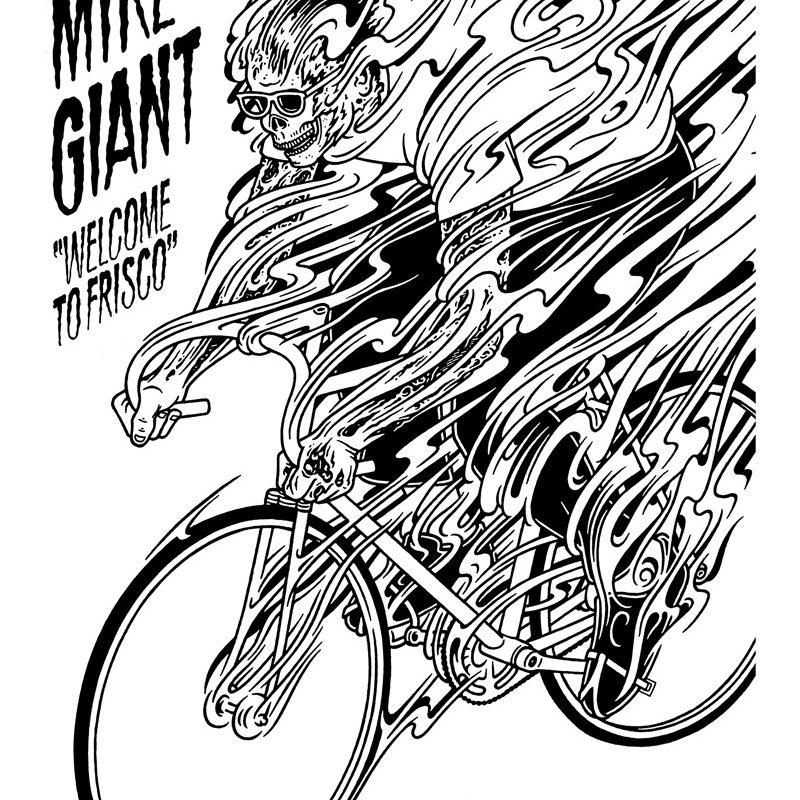 “I got the name Giant from skating with some friends, actually, I fell down really hard, and this guy I went with said ‘it felt like you went down like a giant’ and at that time there was a graffiti just across the same ditch we were skating, and I just kinda thought ‘oh that could be my name!’ and it is generic as that, you know, and then I started writing it maybe a month or two after that.” Mike Giant

Master of black and white, and representational leading figure of the mid-1990s underground movement in San Francisco, Giant is internationally known for his graffiti, his skateboards, his tattoos and the immaculate precision of his graphics.
Born in Upstate New York, Giant moved to Albuquerque, New Mexico as a child, where he later studied architecture. In 1993 he was offered a position drawing graphics at Think Skateboards in San Francisco. There he stayed for the next ten years developing his unique artistic style and becoming a leading figure of the street art scene.
At first most known for his graffiti art, recognizable by solid letterforms, his tattoo work has also become internationally renowned over the last decade. Since 1998 Giant has been working at remarkable tattoo shops in San Jose, San Francisco and New York City, next to Paco Excel, Mike Davis and Patrick Conlon. His recent work can be seen in the 2004 tattoo issue of Juxtapoz magazine.
In 2003 Giant returned to Albuquerque and opened the tattoo shop, Stay Gold. Back to San Francisco in 2007 he retired officially from tattooing and devoted his time to a more intentional way of drawing, very much guided by Buddhist meditation.
In February 2002, Giant had his first solo exhibition at WDWA Gallery in New York. His work has been seen in Tokyo with Sam Flores and Bigfoot, at Misanthropy Gallery in Vancouver, at Magda Danysz Gallery in Paris, as well as at numerous venues in San Francisco and Los Angeles. His drawings can be found on the latest Cinelli book, on apparel from Tribal Gear, Upper Playground, and REBEL8 clothing, his signature brand.
About the street scene in San Francisco he says: “First of all, I’m a ‘grandpa hipster’, and it suits me just fine. And after dedicating almost 20 years to writing graffiti, I hope it never dies. And as for track bikes, there have been hip, cocky young men and women riding them around the streets of San Francisco for over 100 years! Look it up. None of this stuff is played out, dead, or otherwise. It’s ongoing.”
For this unique Milan exhibition Giant created a new body of graphics, narrating stories of voluptuous urban femme fatale’s on bikes, religious iconography, street views of San Francisco, a few indispensable skulls, unavoidable memento mori of the street world.
A video loop created by Giant’s friends and collaborators Colin Arlen and Sean Patrick will tell about his lifestyle; we will see him in action, biking his way around Frisco, writing on walls or on candid paper, and saying it in his own words…a black and white peaceful underground explosion.

Your art is about lifestyle, sex, religion… your drawings are sensual and “pure”. When your sign becomes symbol what is your message?
I don’t think I have a consistent message in my work. I think each drawing has a different message. Sometimes the message is obvious, sometimes hidden. Sometimes the message is the most important part of the piece, and sometimes I just want to make cool pictures that don’t have any message at all. Day-to-day I’m mostly concerned with simply enjoying my studio time rather than pushing a particular message or agenda.
You started writing graffiti in ‘89, then became a tattoo artist in ’98. Today you are mostly focusing on drawing on paper. Do you ever feel limited by the medium? How do you keep reinventing yourself black on white?
I’ve enjoyed drawing on paper with markers since before I could walk. Drawing mostly in black and white came quite naturally to me over time. To this day, black permanent markers are my favorite things to draw with.
Admittedly, I would feel limited if I only made drawings on paper. That’s why you’ll still find me spraypainting walls, taking photos and making tattoos. Between these different mediums I feel like I’ve achieved a nice balance in my art practice. Each medium feeds the other.
I don’t really feel like there’s much room for reinvention as far as my black and white illustration style is concerned. I feel like that style is pretty well established now and I can just let it ride. It will evolve at its own pace as it always has.
Over the years I’ve felt most free to play with stylistic changes in my graffiti work. When I step up to a wall these days, I have no idea what the piece will look like. I just settle into the creative flow and allow my style to reinvent itself without pressure or boundaries.
What is your relationship between your art and the marketplace?
Within the worlds of commercial illustration and fine art, I try to get help from people I trust to take care of the business stuff so I can concentrate on making work. I hate dealing with the marketplace for the most part. Bargaining and negotiating with clients can suck. Waiting for checks sucks. I just like to draw.
I wish all my business dealings were as straight forward as the tattoo business. You make the tattoo and you get paid cash on the spot. No tax, no bullshit. I love that.
How do you keep in touch with your audience, with their world, needs, dreams, and does the audience influence the choice of your imagery?
As far as art goes, I’m far too caught up trying to articulate and understand my own needs and dreams to concern myself too much with my audience’s needs and dreams. I feel like I’ve always tried to speak from my own personal experience in my work. The people who understand where I’m coming from are my audience. And luckily for me, my audience’s support has allowed me the freedom to delve deeper into my own experience and then offer my findings back to them.
I have heard you speak extensively about mindfulness and art process. Is your state of mind and body allowing you to be more conscious of the creative flow and therefore feeding your sign with truthful and original content?
Mindfulness practice has certainly given me the ability to stay more connected to the creative flow. I feel like mindfulness practice has also helped me be more conscious of the importance of good physical health as well. Meditation and mindfulness practice have helped me to see life as it is, not as a conceptual construct of my thinking mind. And when I can work from that space of open awareness I almost always get more truthful and original results.
What is a challenge?
Trying to be the change I wish to see in the world.
What is important?
Trying to be the change I wish to see in the world.