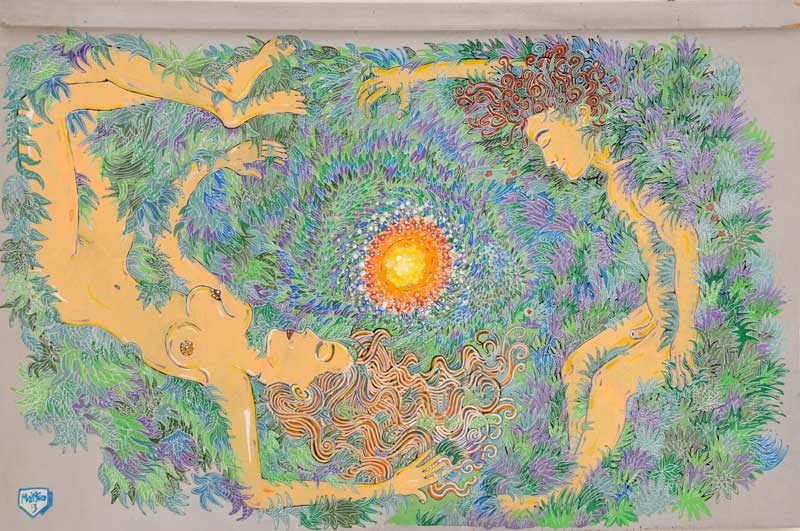 Matteo Guarnaccia, one of the masters of contemporary visionary art, returns to Galleria Antonio Colombo with a dizzying, poetic exhibition for intrepid viewers. The core of the show is the Book of Dreams, hundreds of pages produced by the artist day after day over the course of a year. Around this map of a voyage, small choreographies, esoteric toys, enchanted furnishings, videos, drawing and paintings crackling with energy and color, all transpire.
The Trickster is the archetypal figure of the divine jester, the ambiguous, amusing and dangerous being that has the task of preventing cultural stagnation, of unmasking the monster of habit, revealing the truth of tradition by mocking it. A master of metamorphosis who can take on the features of a coyote, among the Native Americans, or of Hermes in Greece, but also Bugs Bunny or Marcel Duchamp, Pippi Longstocking or Loki, the hero of the Scandinavian Edda.
There is a man born of a flower in space…
A man without lips, who speaks
Who sees without eyes, hears without ears, runs without legs
The sun and moon dance and play trumpets…
There is a child that touches the Wheel of Law that turns…
Using compassion as a whip, he trains and guides the old yak along the path of folly.
(Marpa the Translator, Tibet, 11th century)

Matteo Guarnaccia, continuing his artistic research amidst the techniques of ecstasy – from shamanism to rock’n’roll – has chosen this time to don the garb of the “rascal.” His desk has been transformed into the table of the Magician, the figure of the Tarot deck associated with enchantment, the manipulator symbolizing the presence of creative talents. With nimble hands and a light touch, he has gathered and combined roving stars to create deceptive but solid constellations. His figures, simultaneously sacred and ironic, move by shifting boundaries and opening unexpected doors towards everyday reality.
A personal, unique sign that impacts paper, canvas, fabrics, embroideries, images and bodies in motion, always capable of offering new and inebriating viewpoints.

Matteo Guarnaccia, since the beginning of his endeavour, marries into the ample crowd of delight makers, of rascals, of jokers and of shamans.
The Zeitgeist, whose magister is the rapid digital, has made him able to represent in a almost immediate manner the much spoken about Bouvard’s and Pécuchet’s method: he gathers and copies, then copies and gathers again, apparently at random.
This routine increasingly reveals itself to be made of an inspired combinatorial sottise, that couples objects and objectives of divine discrepancy, giving life to destabilizing and delicious misuses, pleasing and not yet forbidden.

The image depicted in “Tunnel Of Love” brings to mind the first circle on the water’s surface of a maritime whirlwind that enlarges and attracts into its orbit every genre of lost things in the wide areas of the imaginary.
Through this particular kind of maelstrom that agitates the sea of time (all rights reserved), the author mixes up, shatters and reconnects the materials that synchronically find themselves in this zone of almighty attraction, until, when the waters have closed, brand new toys, unexpected and washed by the long oblivion, resurface along with sapiential books coming from the same magical marine place.

As though at a banquet appeared by the touch of the magic wand of a cook conditioned by the Gemini constellation, horns of plenty containing rare fruits from subpolar microclimates, orchid ice lollies and broths made of thorns can be found here.
I have always pictured Matteo Guarnaccia standing up, behind the table portrayed in the Tarot card of The Magician, a table holding ordinary objects, but able to generate metamorphosis: in a glass, the water to dissolve what is tied, the dice, to fasten the configuration of the moment, the knife for discriminating things, the feather and the pen for painting and for writing.
Everything is present, in a small but well-designed bag, and can be moved in the blink of an eye.