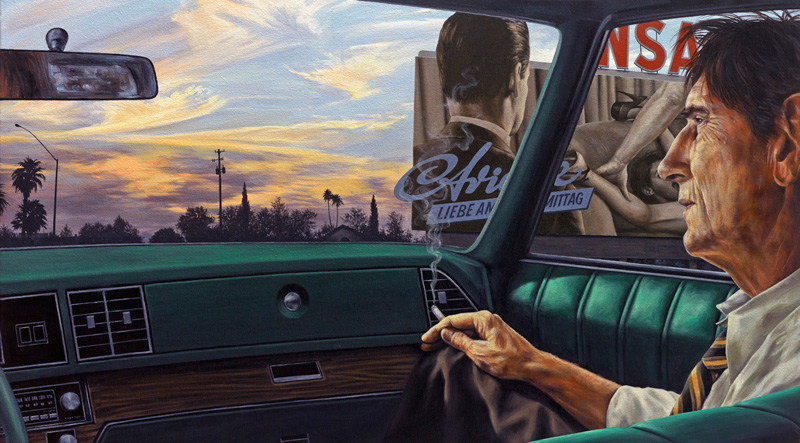 ERIC WHITE – Down in Front

Antonio Colombo Arte Contemporanea is proud to present Eric White second solo show in Italy, Down in Front.
Eric White can be considered one of the great pioneers of the oniric Realism that draws on American film culture prior to World War II to create original psychedelic visions in the most refined painterly manner, deceptively referencing the customary vision of the imagery of the America Dream. His works often seem to lurk behind a very thin veil, an impalpable membrane that separates the real world from the realm of dreams, a land of infinite meetings, sensations, oddities. White continuously crosses this narrow borderline, creating a new dimension that corresponds to the phase of passage in which perception is altered: the scenes can unfold in slow motion, or be speeded up to a velocity that precludes correct recognition of the subjects, like the intoxication of the figures of Francis Bacon.
In expanding upon his car series, inaugurated for his first solo show at the gallery in 2011, White in his recent body if work, takes on a new perspective—looking out instead of in. The point of view in the paintings is from the backseat of a car, and whether at a drive-in movie or in front of a billboard, the viewer becomes the passenger and we are essentially watching the watcher watch. There is an element of voyeurism, yet the proximity to and occasional glance from the figures makes us feel uncomfortably intimate. White maintains a claustrophobic sense of space within a stylized yet naturalistic environment, and we become immersed in a disconcerting déjà vu that lies beyond a specific time and place.
There is a nostalgia in the paintings for the bygone days of 1970s-era Midwestern Americana: drive-ins, cheesy fashion, and gigantic gas-guzzling automobiles. At the same time, White contemplates a disconnection from his own culture, and the effects of having grown up in proximity to the crumbling metropolis of Detroit. The work touches on our addiction to entertainment and the power of the media to control and distract, and plays with language, cinema, sexuality, and psychology. White contrasts the optimism of the mid-20th century with the current pessimism of The 99%, and muses on the demise of The Motor City as a foreshadowing of the twilight of an empire, addressing the concerns of a society dependent on dwindling resources which is becoming, both literally and figuratively, paralyzed into an unrelenting state of immobility.
In the Little Circus room is the “1/3-Scale Retrospective,” an ongoing installation of older works by White reproduced at one-third of their original size by Chinese factory painters. At first glance you assume White repainted these miniatures, but a closer look proves them to be less than faithful knock-offs. By subcontracting out the replication of selections from his oeuvre, White plays with
notions of appropriation and authorship, and takes a playful jab at the hallowed ‘retrospective’ of the established—and often dead—artist by staging a false one of his own work.

Eric White received his BFA from the Rhode Island School of Design in 1990, and has shown extensively in galleries and museums around the world. He has served as adjunct professor at The School of Visual Arts in New York City since 2006. In 2010 White received a Painting Fellowship from The New York Foundation for the Arts. A monograph of his work will be published by Rizzoli in 2015. He currently lives and works in New York City.