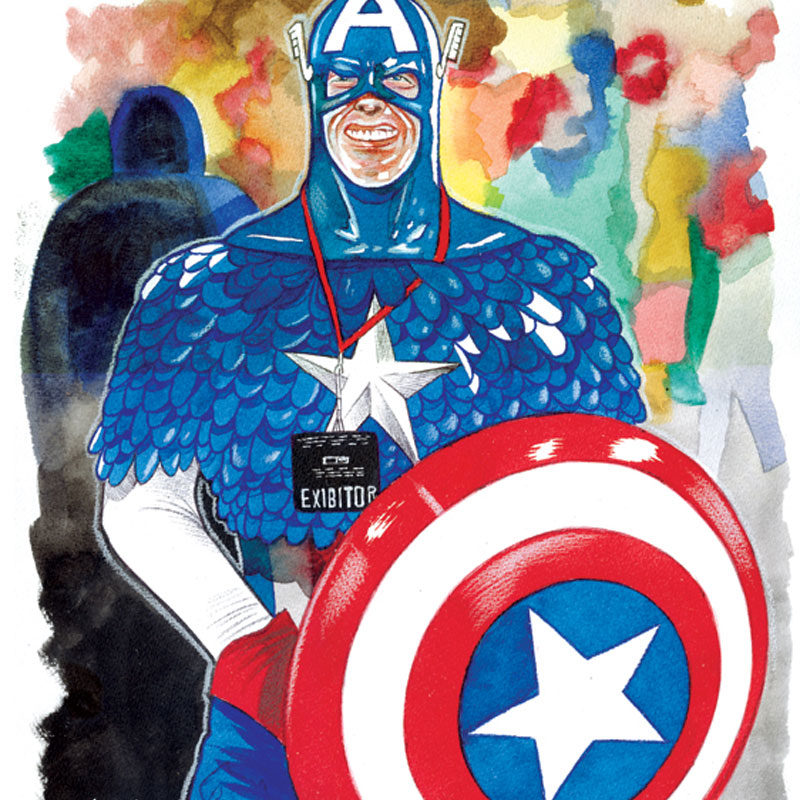 MASSIMO GIACON – At Work, At Home, At Play

Antonio Colombo presents, for Little Circus – the space inside the gallery set aside for special projects – the new solo show by Massimo Giacon “At Work, At Home, At Play”, a series of drawings showing the world of the costumed fans of comics fairs and their printed counterparts, explored by the artist in a surprising way. The show includes 20 new works (+1) of medium size (30 x 40 cm) done in mixed media on paper, prepared specifically for this exhibition.

The artist explains: “Many years ago comics fairs were attended exclusively by people who made comics and (a bit) by those who read them. They were a prevalently monosexual fauna, which during these events could experience marvelous moments in which it was possible to talk about culturally neglected things. Then, like an infection that spread from Japan to America and then also to Italy, the cosplayers arrived. It seems useless to explain who they are in this context. Cosplayers and the makers of comics don’t really get along. The former don’t care about who makes the comics, they care only about the characters themselves, as if they were separate entities channeled unconsciously through their creators. The latter blame the cosplayers for their state of constant poverty. But we have to admit that the cosplayers have made a big step forward. They are not fans of an author or a character, because they want to ‘become’ that character. The cosplayer does not simulate, the cosplayer is. They have leapt the barrier of the cartoon, taken possession of the exterior aspect of the characters and left them there stripped and skinned. And the historic characters? What can they still do after thousands of adventures in which they have been killed, brought back to life, drugged, crippled and maimed? They are dazed, they have lost their memory, they’ve become animals then returned to normality, they’ve become as tall as the Baxter Building and as small as ants, they’ve absorbed radiation with every symbol of the alphabet (especially Greek letters), they’ve been unmasked, rejected, loved and hated. The roles blur. Yesterday I was certain I had seen Batman at the streetcar stop with a bag of groceries. He was certainly a bit out of shape, but I think he was much more credible than Bruce Wayne, also because it is much more plausible to see Batman than Bruce Wayne on public transport. The pursuit of practical solutions to combine aesthetics with the need for transference undoubtedly leads the cosplayers to brilliant ideas. In his thousands of past adventures, Diabolik never thought of using a fanny pack, which would have been perfect for hiding diamonds and the keys to the Jag. Instead the cosplayer has done it, and wears it with pride. My favorite ones are the poor ones. Proud of their discrepancies with respect to the model, they look into the camera with an air of challenge, honorably sporting their costumes patched together with an atrocious mixture of recycled materials and dressmaking miracles. The post their no-fashion pics on Facebook, shamelessly. But in the end, are they more inadequate than the superheroes? Maybe the superheroes have decided to let them have the spotlight, and to disappear. Like the gods of Olympus. They do battle and make love without intervening in earthly affairs. Maybe they disguise themselves when they decide to make transgressive visits to our cities. And what disguise could be more effective than dressing up as themselves? With low-quality materials, in flabby bodies, inside marvelous lives like those of anybody else.”

Massimo Giacon was born in Padua in 1961. Since 1980 he has worked in Milan making comics, as an illustrator, designer, artist and musician. A protagonist since the early 1980s of the renaissance of Italian comics triggered by magazines like Frigidaire, Alter, Dolce Vita, Cyborg and Nova Express, he began to work in 1985 with the architecture/design studio Sottsass Associati, continuing his design activities in collaboration with Matteo Thun, Studio Mendini, Sieger Design, and projects for Olivetti, Memphis, Artemide, Alessi, Swatch, Philips, Ritzenhoff, Telecom. In 1990 he began to work as an artist, leading to many solo and group shows in Italy, Switzerland, America, Greece and Portugal. In 1994 he began to focus on graphic design for telematic networks, websites and CD-Rom. After a decade of musical activity with different groups, in 1996 he published his first album as a solist, “Horror Vacui”, followed by a second in 2003, “Nella città Ideale”. He has also designed tapestries, carpets, ceramics, objects for the kitchen, produced advertising illustrations, collaborated with fashion designers and fashion magazines (Romeo Gigli, Elle, Glamour), created stands for international fairs and animations for television. He teaches in Milan at the European Design Institute. He is presently developing several objects for Alessi, making graphic novels for different publishers, and continuing his artistic-performative and musical activities as Massimo Giacon & the Blass (Fabio Bozzetto and Diego Zucchi).