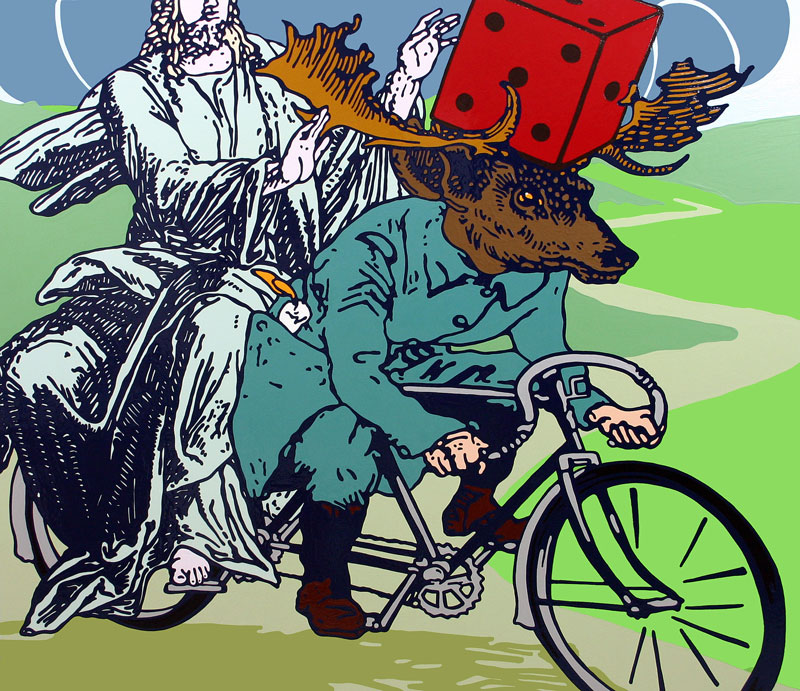 Very colorful, full of citataions and paradoxical at first glance, the research of Gabriele Arruzzo only looks childish, glam-crazed and fun-loving.
It is fake collage and fake painting, fake hard ball and fake iconoclasm. It’s a big trick, an enormous rebus, a complex construction that is very difficult to decipher. Like a gorgeous woman wearing a dazzling dress, but underneath it she’s concealing much, much more. A very subtle game of reminders, overlappings and betrayals between what appears fully evident –inevitably leading many viewers astray– and what remains behind the scenes, not immediately noticed, though it is actually the foundation and motivation of the work. The paintings of this young artist, a finalist at the last edition of the Cairo Prize, are the result of long, attentive analysis of symbolism, heraldry, erudite and pop illustration.
While the skin of the work is represented in acid tones, precise fields, a cold, pre-meditated sign, the flesh of the research can be found in references to and studies of the traditions of fable, the combination and juxtaposition of images from ancient manuals or forgotten legends.
Arruzzo’s voyage in contemporary painting is similar to that of Propp in the morphology of fable, or to the path of Gulliver in the universe of the without-measure, the incommensurable. Though it is friendly, amusing, captivating, each construction, each situation conceals an interpretation –even a hard, pitiless one- of the contemporary condition, the customs of men, the habits of the world.
The colors may be those of an amusement park, the appearance similar to that of certain toys or decorations, but the deeper sense of the research very earnestly explores the confusion of myths and values in the present, the difficulty of interpreting and weighing the past, the inconsistencies and contradictions of contemporary knowledge.
The exhibition presents about a dozen new works.