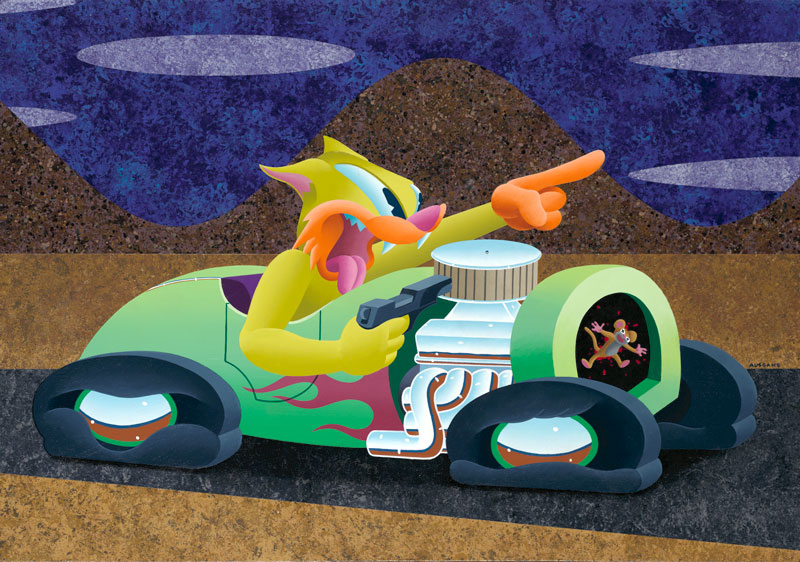 Galleria Antonio Colombo presents, for the first time in Milan, some of the liveliest artists of the new worldwide contemporary pop scene: masters of American Pop Surrealism Gary Baseman, Tim Biskup and Eric White, Lowbrow luminaries Anthony Ausgang, Gary Taxali and Heiko Müller, the painter Nicola Verlato, who introduced the movement in Italy, and the storyteller of painting, Gabriele Arruzzo.
“Fantasilandia”, curated by Julie Kogler, is an exhibition that sheds light on some of the most innovative aspects of a pulsating, extraordinary art scene that is quickly making inroads in the most important international museums. Much in demand today by lovers of the genre and a growing number of mainstream collectors as well, the artists selected for this Milanese debut deftly balance pop culture and high culture, generating figurative work that expresses the latest aesthetics of the 21st century, where new icons blend with fantasy imagery, taking the viewer on a surprising journey in a world of dreams.

Gabriele Arruzzo
Born in Rome (*1976), lives and works in Pesaro.
This young Italian painter expertly explores the byways of European folktales to generate paintings that narrate these voyages of initiation. With essential, forceful signs, he takes the viewer into a world where the various expressions of pop culture of the past and present coexist in works of great visual impact.
Arruzzo has shown his works in Milan, Rome, Turin and Bologna. In 2009 he took part in the exhibition Una forza del passato – HangART-7 Edition 13 at the Red Bull Hangar-7 in Salzburg. In 2010 he was one of the fifteen artists nominated for the Agenore Fabbri Prize, whose works are now being shown at the Stadtgalerie of Kiel (Germany) and will then be seen in Trent, Palermo and Klagenfurt (Austria). His work has been featured in many important art magazines and catalogues.

Anthony Ausgang
Born in Trinidad and Tobago (*1959), lives and works in Los Angeles.
Since his debut, Ausgang has emerged as a spokesman of the Lowbrow scene, connected to the “low” culture of hot rods, illustration, comics, etc. In 1993 Ausgang was invited to participate at the Laguna Beach Art Museum in the exhibition “Kustom Kulture”, on art influenced by the hot rod scene.
In the paintings of Anthony Ausgang the absolute protagonists are very colorful cats that always have to come to terms with situations similar to Tarantino’s “pulp” films. The post-pop component is mixed, here, with psychedelic, surreal visions.
Ausgang has shown in many museums in the United States and Europe.

Gary Baseman
Born in Los Angeles (*1961), where he lives and works.
Famous as one of the founders of Californian Pop Surrealism, Gary Baseman has won three Emmy Awards for the cartoon “Teacher’s Pet”, produced by Disney. Named one of Entertainment Weekly magazine’s “100 Most Creative People in Entertainment” in 2002. Baseman has shown his paintings in museums and galleries all over the world and gained vast ranks of fans thanks to his attractive limited-edition objects (vinyl toys, handbags, hats, etc). He recently had a show at the LACMA in Los Angeles.

Tim Biskup
Born in Los Angeles (*1967), where he lives and works.
The bizarre pantheon of Californian Pop Surrealist Tim Biskup is composed of characters, metaphorical figures made with simple, incisive lines, to narrate fables of a fantastic dream world. The initial inspiration comes from the American illustration of the 1950s, like that of Jim Flora, mixed with baroque forms. Biskup’s practice also extends to performance and installation, as ways to give three-dimensional life to his creations.

Heiko Müller
Born in Hamburg (*1968), where he lives and works, and where he took a degree in illustration and design.
Müller explores the borderlines between folk art, B-movie aesthetics and the painted narratives of the Flemish Masters. His works have been shown in Germany, Estonia, New York, Paris, Basel, Seattle and Los Angeles.

Gary Taxali
Born in Chandigarh (India) (*1968), lives and works in Toronto.
In the works of Gary Taxali present and future meet to give form to works inspired by vintage comics and advertising art. His aim is to communicate the irony and humor of pop culture.
In 2005 he launched his first line of designer toys, commissioned by the Whitney Museum of New York City. He has shown his works in group and solo shows all over the world, and held lectures in many schools of art and design. He also creates covers for records and books.
He has won many awards, including American Illustration, Communication Arts, Society of Illustrators, Society of Publication Designers, National Magazine, Advertising & Design Club of Canada.

Nicola Verlato
Born in Verona (*1965), lives and works in Brooklyn.
This artist, invited to participate in the Venice Biennial in 2009, astonishes viewers with his extraordinary painting, where Michelangelesque sculptural force blends with hypermodern imagery, at times taken from the most important episodes of rock music, in a sensorial vortex that pulls everything into a very original fantasy world.
Nicola Verlato has shown in many private galleries, including recent shows at the Jonathan LeVine Gallery of New York and the gallery of Davide di Maggio in Berlin. His works have also been featured in important museums, like the MACRO in Rome.

Eric White
Born in Michigan (*1968), lives and works in Brooklyn.
The works of Eric White seem to be hidden behind a very thin veil. This veil might be the subtle membrane that separates the real world from the world of dreams, a land of infinite encounters, sensations and oddities. White continuously crosses this borderline, to create a new dimension that more fully corresponds, perhaps, to the limbo, the phase of uncertain passage whose outcome is unknown to us. Perceptions are altered: the scenes take place in slow motion, or speeded up to a pace that no longer permits correct identification of the subjects, like the intoxication of the contorted figures of Francis Bacon.
White has achieved international acclaim thanks to many exhibitions in different countries, and a vast group of collectors.