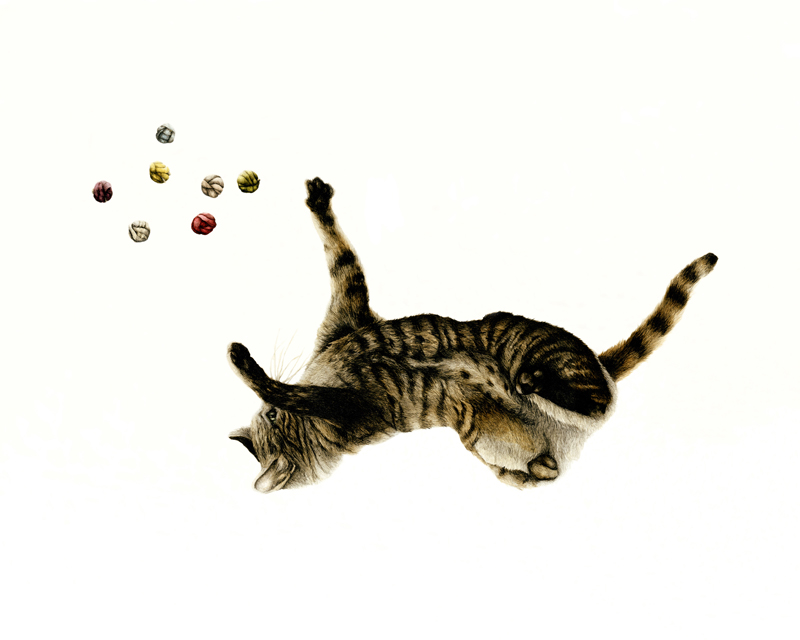 Antonio Colombo is proud to present the solo show by Cristina Pancini (Arezzo, 1977), curated by Matilde Martinetti. At Home features very new works that explore the “domestic” dimension of living. The artist has transformed the exhibition space into the representation of a house. Images and space feed on each other, giving rise to a path that starts outside (in the courtyard, represented by the upper level of the gallery, where we see a procession of animals), and moves inside (the lower level, which re-creates a dwelling). The result is an apt visual narrative that “constructs” a home, from the laying of the first stone to the sedimentation of the more intimate, inviolable dimension of experienced space: Memory.
As usual in the practice of Cristina Pancini, multiple suggestions (literary, visual and beyond) blend with a more intimate, private sphere to generate the framework of the exhibition and, at the same time, to nourish the complexity of meaning of each of its individual parts. A complexity of meaning that is underscored by the new compositional approach of these latest works. A large white space, in fact, wraps the subjects to remove them from any space-time frame of reference, so that while part of a choral project, each element also reveals its precise function in the context of the narrative/exhibition. Whether they are hands (old or young, speaking of the home as an osmotic exchange between memory and future projections) or animals (in the courtyard, for example, the wolf brings balance, while the cat represents concentration). And so on. Solidly fixed in a single thematic nucleus, all the subjects on the upper level converge towards the lower one, where it becomes clear that the approach of installation has fully entered the work of Cristina Pancini. Wardrobes, desks, mirrors and other furnishings assert their presence, host the drawings, influencing their measurements (and meaning), contributing to nourish that concept of the home, stretched between past, present and future, that permeates the entire show. A concept that here, on the lower level, becomes a usable synthesis of lived/living space and symbolic space.
We are left in doubt regarding the meaning of that “a” (at or to) home, as to whether it means going towards (a movement to a place) or being in (staying at a place). But in the end, it doesn’t really matter. The term “home” acts, in any case, on our experience, to stimulate us to accept an invitation. Namely to dust off (to share?) our memories. And our dreams. Precisely those things that are jealously stored away in drawers.
The catalogue of the exhibition, with a text by Matilde Martinetti, will be available at the gallery.

Cristina Pancini was born in Arezzo on 19 December 1977.

Beyond the courtyard, in a drawer.

The smell of old shoes and packed earth. Sweat and concentration. Stones bound, lime mortar gripping. Ropes strung, laundry hung out to dry. A suitcase, still packed after the trip. Camphor, mildew on the walls. Vibrant with animal sounds. Creaking doors, keys in locks. The silence of those who are absent, the industrious everyday activity of those still here. Or those about to return.

Everything begins, as always, with an insight. A concept, a smooth round word. But after that things get complicated. The deck gets shuffled, and the complexity of those four letters emerges, in pursuit of an order that arises only at the end of the creative process.
But let’s take it one step at a time, then. The initial intuition: to transform the exhibition space into a home. An initial nucleus – the affective and personal nucleus of Cristina Pancini, lends itself so that the exhibition can make its first forays from a very solid core. Cristina has heaped a myriad of stimuli upon it. Omnivorous glimpses from art history and philosophy, cinema, literature. Suggestions grasped by following the logical thread of research on the theme, that contribute to expand that first seed.
So from a voracious combination of public and private, that initial insight – “I’ll make a house!” – is sculpted and evolves in the subdivision of the two levels of the exhibition space into two different environments. Outside, inside.
Hence the courtyard (upstairs), and the nucleus of the abode (downstairs). Both contain an apt visual narrative, that speaks of the “construction” of this house – precisely this one, through which we are now walking – from the laying of the first stone to the sedimentation of the more intimate, inviolable dimension of experienced space: Memory. It is a narrative of images that wants (demands) us to be the guests.

External space, we were saying. A solemn procession of animals – gaze turned towards the lower level – opens the tale to contribute to the construction of the house, each with its own symbolic baggage. Nothing is ever left to chance in Cristina’s work, and the technical expertise of the drawings corresponds to an equally rigorous conceptual elaboration. So, for example, the wolf conveys balance, while the lamb speaks of stubborn resistance. The nightingale tames materials and transforms them into a nest, making the sacrifice needed to complete the work. The cat – which in this narrative selects the first stone – represents the concentration of choice (it is no coincidence that cats always land on their feet). (A new compositional approach, in fact, feeds the complexity of meaning in these latest works. A large white space envelops the subjects, separating them from any space-time reference, so that while they are parts of a choral effort each of them also displays its precise function in the framework of the narration/exhibition). And there, where the courtyard opens, we cannot help but find hands to give meaning to this tamed, domesticated space. Old hands and young ones that position the story in a temporal dimension, before and after, and intertwine with the animals in the recurring of certain elements (the leaf hidden between calloused fingers, for example, is the same leaf trodden by the lamb).

The house is built, and put into operation. It has a past, a present, a future. It erects its own story.

The courtyard, we were saying. Solidly fixed in a single thematic nucleus, and just as firmly anchored to their function in the narration/exhibition, all the animals proceed to the lower level where one literally enters the inhabited space. One almost wants to ask “may I?”, to knock on the door. We expect a welcome. Wardrobes, desks, mirrors and other furnishings assert their presence, receive the drawings, influencing their measurements (and meaning). They contribute to create that usable synthesis of living/lived space and symbolic space. The dimension of installation has a rightful place in the work of Cristina Pancini. Part of a coordinated artistic project, it becomes a tool to explore the infinite possibilities the environment (and the setting) offer to the works, when placed in a drawer, or behind the door of a cabinet. They also become small, very small. And here, amidst the furnishings of the home, its inhabitants can be seen clearly. Those faces behind the hands. They were old hands, that remember. And young hands, that design the future. Now we see arms, bellies, fingers… disjointed elements that, through synthesis, prompt us to reconstruct a whole, and that precisely in this “de-composition” connect to an idea of the anthropometric home, made on our scale. Thus, although each “environmental” situation on the lower level (wardrobe, desk, mirror, parlor) corresponds to a different nuance of the concept of the home, all together they take on a symbolic nature, reminding us that “Home” is an idea that travels with us, not just (or not only) a physical place.

The smell of earth returns, along with that of the oil that lubricates the latches, or that of woolen blankets. Steps tread on rugs, the fire crackles, pencils etch on paper. Everything wavers between nostalgia and proposal, between staying and going, yesterday and tomorrow. The gaze turns to the past, as it sates its thirst for the future.

Steps on carpets, we were saying. Some depart, others return. Home. The title conserves an intentional ambiguity. We are left in doubt regarding the meaning of that “a” (at or to) home, as to whether it means going towards (a movement to a place) or being in (staying at a place). But in the end the solution is not important; the doubt is precisely the keystone of the narration/exhibition. Because “home” is (as we have seen) a concept. And Cristina tells us the story of its construction of itself, amidst accumulated memories (old hands) and a space in which to edify the future – and therefore potential, further memories (young hands). “Home” is that which has yet to become present, and that which – in other places and times – will become, one day, the past.

So please, do make yourselves comfortable.