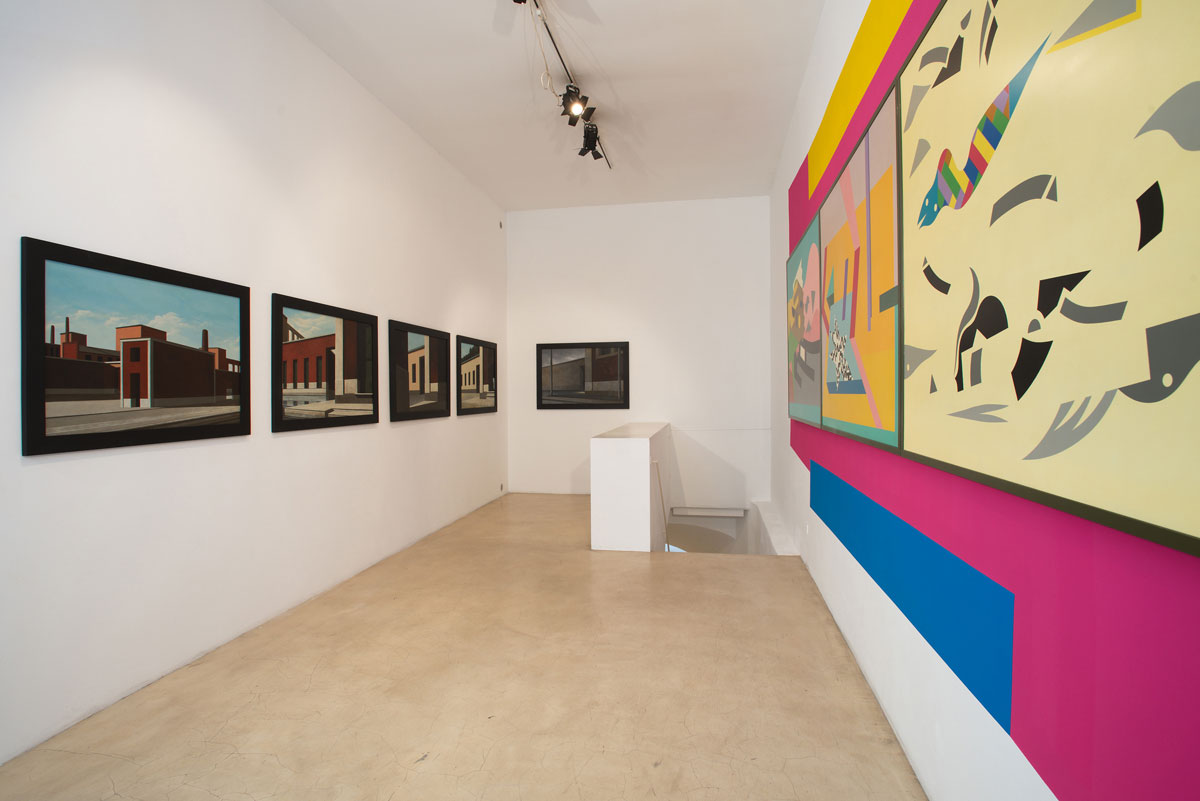 Antonio Colombo Arte Contemporanea is proud to present Cose, Case, Città (Things, Houses, Cities), the double personal exhibition of the artists Arduino Cantafora and Alessandro Mendini, curated by Ivan Quaroni. The show brings together works from various periods, that embody different aspects, even counterposed, of the Postmodern visual culture on the border between art and architecture.
Both architects, artists and writers, but also refined intellectuals, Alessandro Mendini and Arduino Cantafora test themselves, through their works, in a rapid confrontation of styles, languages and antithetical obsessions.

Two souls of Postmodernism, that of Mendini, Post-Avant-Garde and Neo-Futuristic, and that of Cantafora, anachronistic, retrospective, classic: the former looks ahead, invents the concepts of Cosmesi Universale (Universal Cosmetics) and Design Pittorico (Pictorial Design), the latter returns to the craft, to the relationship with the optical reality. Two souls, the Neomodern and the traditional, that have coexisted in Postmodernism, as well as the Transavanguardia, the Anacronisti, the Citazionisti and the Nuovi Nuovi did before, embodying the various aspects of the same attitude towards the re-proposal and the re-thinking of the history of art.

On show, Arduino Cantafora’s paintings of silent city views from the series Domenica Pomeriggio (Sunday Afternoon), next to the complex compositions of the Teatri Di Città (City Theatres) and a selection of smaller works dedicated to interior views. Alessandro Mendini, instead, will exhibit works on wood and on canvas, painted with a special nitro paint, some objects and prototypes, as well as a series of drawings from the past years. His works will be included in a site-specific polychrome wall painting.

Student and collaborator of Aldo Rossi until 1978, with a background deeply rooted in the scientific interest for a lucid and rational realistic reproduction, Arduino Cantafora has painted works in which not only the urban architecture, but also the domestic interiors, the objects and the places are described with an impressive rigor and an extraordinary technical precision.
Architect, professor and writer – among his writings it is worth remembering at least Quindici Stanze Per Una Casa, published by Einaudi – Arduino Cantafora is the author of a clean painting, optically exact, often imbued with melancholy and mercurial moods. His paintings, that range from urban views to architectural allegories, from bourgeois interiors to old steam locomotives, show that at the basis of his modus pingendi there is always a deep humanistic interest in the morphological study of the forms.
Influenced by Caravaggio and by the Lombard painting of the Sixteenth and Seventeenth centuries, but also by Divisionismo, Purismo and Metafisica, Arduino Cantafora’s figurative language is the outcome of a deeply personal memorial path, that starts from a heartfelt adherence to optical data in order to rebuild the individual and collective historical identity. An attitude, this one, that he later translated in a didactic practice at the École Polytechnique Fédérale in Lausanne and at the Academy Of Architecture in Mendrisio, where he addressed the various issues related to the problem of representation. “I have always hoped, during my years of teaching,” the artist confessed, “to be able to contribute to the pleasure of seeing things, to the wonder of the vision as a factor of inalienable individual freedom, that, in grasping during the arc of the day and of the seasons the chasing of the light, can meet the ever identical to itself joy of being”.

Architect, designer, theorist and writer, Alessandro Mendini has spent his childhood in a bourgeois house designed by Piero Portaluppi, surrounded by the works of the greatest Italian artists of the Twentieth century collected by his relatives. This visual imprinting, fundamental to his training, was then joined by a lively passion for drawing. After graduating in architecture, he starts to work at Studio Nizzoli, but in 1970 he leaves design to direct the magazines “Casabella”, “Modo” and “Domus”, through which he spreads his renovation ideas in design. At the end of the Seventies he joins the Alchimia Studio, the radical design group that in the Eighties rewrites the rules of designing in an anti-functionalist sense, focusing on the production of objects of pure pleasure, prototypes, furniture, interiors, installations and furnishings inspired by kitsch aesthetics and Folk Art.
In design, as well as in architecture, Mendini approaches design as art and art as a project, creating strange contamination between painting and architecture and inventing provocative concepts like such as Design Pittorico, Artigianato Informatico (Computerized Craftsmanship) and Architettura Ermafrodita (Hermaphrodite Architecture).
Following a paradoxical logic, in fact, Mendini moves the conceptual approach of design and architecture to painting, while instilling in them the emotional impulse of art. “Given design’s insufficiency to face the world,” he writes in 1986, “it is replaced by painting, that becomes a work without beginning, without end and without explanation, a formalist network of styles and visual references, similar to a wave breaking”.
His objects, as well as his paintings, are marked by the invention of a personal alphabet made up of abstract forms, modeled on the reinterpretation of the languages of the Modernist and Futurist avant-gardes. In his drawings, instead, surfaces Mendini’s ironic and poetic soul, prone to the creation of visual stories suspended between the sketch and the project, eternally torn between the need to build and the desire to dream.

ARDUINO CANTAFORA, born in Milan in 1945. He lives and works in Lausanne, Switzerland.
Architect, professor of architecture at the École Polytechnique Fédérale in Lausanne and at the Academy Of Architecture in Mendrisio, he is one of the few Italians to have been invited as a visiting professor at Yale University.
Cantafora’s career has few comparisons for the excellence of the results achieved.
A partial list includes solo exhibitions at the Triennale in Milan, in 1973 with the large panel Città Analoga (Analogue City), which became the manifesto of a new trend that recovered elements from rationalism and European architecture of the Twentieth century, and again in the 1980 and 1984 editions. In 1980 he takes part in the Venice Biennial, both in the architecture section and the visual arts section, in 1982 in the Alcazar in Seville, in 1984 in the Martin Gropius Bau in Berlin, in 1990 in the Palazzo Reale in Milan and in 1994 at the Centre Pompidou in Paris.
Cantafora’s activity also includes numerous stage sets for La Scala and other prestigious theaters, a series of publications on the theme of architecture and teaching, and several purely fictional writings published by Einaudi.
In 2003 he won the Michetti prize for painting.
The international recognition of the quality of his work is also well demonstrated by the recent acquisition by the National Museum Of Modern Art (MNAM) of Centre Pompidou in Paris of sixty works for its permanent collection.

ALESSANDRO MENDINI, born in 1931 in Milan, where he lives and works.
Architect, he was made a honorary member of Bezalel Academy Of Arts And Design in Jerusalem. He was awarded the Compasso D’Oro for design (1979 – 1981 – 2014), he is Chevalier Des Arts Et Des Lettres in France, he received an award from the Architectural League in New York and the Laurea Honoris Causa from the Politecnico in Milan and from the École Normale Supérieure De Cachan in France. He is a honorary professor of the Academic Council Of Guangzhou Academy Of Fine Arts in China. In 2015 he was awarded the European Prize For Architecture 2014 in Chicago, the Laurea Honoris Causa from the Academy Of Fine Arts Of Wroclaw in Poland and from KMU-Koomin University Of Seoul in Korea, and he became Mestre De Design at the FAD in Barcelona, Spain. He is one of the founders of Domus Academy.
He has directed the magazines “Casabella” (1970 – 1976), “Modo” (1977 – 1981) and “Domus” (1980 – 1985; 2010 – 2011).
He collaborates with brands such as Alessi, Bisazza, Hermés, Philips, Kartell, Swatch, Venini, Cartier, and he is an advisor for various companies in Korea, such as Ramun International, Cha Hospital, SPC Group, Samsung, Prouna. In China, in the province of Guangdong, he is an image consultant for Elegant Living Corporation.
His works can be found in various museums and private collections around the world.
In 1989 he opened with his brother, the architect Francesco Mendini, the Atelier Mendini in Milano. The Atelier has designed the Alessi factories and offices and the Forum in Omegna; the new Olympic pool in Trieste; the restoration of the Villa Comunale in Naples; the new offices of Trend Group in Vicenza; the recovery of an industrial area with buildings used for commercial and residential areas in the Bovisa area of Milan; a tower in Hiroshima, Japan; the Groningen Museum in the Netherlands; a district in Lugano, Switzerland; the building for the Madsack offices in Hanover and a commercial building in Lörrach, Germany; in the Far East, the new headquarters of the Milan Triennale in Incheon, the residential buildings Posco in Seoul, the Observatory Tower in Suncheon, the high-speed terminal in Gwangju. The Atelier Mendini has received the Gold Medal For Italian Architecture 2003 at the Triennale in Milan for the project of Naples metro stations and the Villégiature Award 2006 in Paris for the Byblos Art Hotel Verona, as the “Best Hotel Architecture And Interior Design In Europe”.