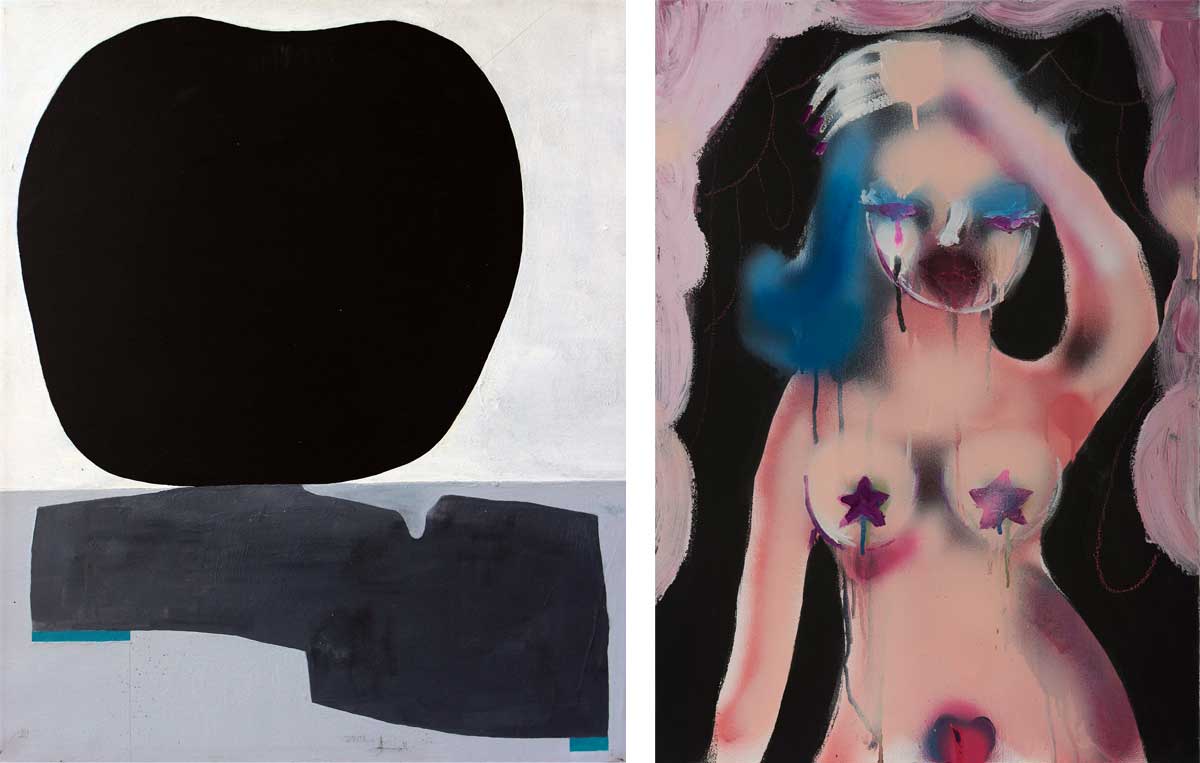 Antonio Colombo Arte Contemporanea is proud to present Di Carne, di Nulla (Both Flesh and Not), the double personal exhibition of the italian artists 108 and Silvia Argiolas, curated by Luca Beatrice.
A double personal exhibition is one of the most difficult challenges for a curator, whether it be about putting similar works together, or thinking in terms of difference or contrast.
In this case, however, the show arises from a precise need: Silvia Argiolas and 108 are among the most interesting artists of their generation, the second part of the Seventies, among those using painting and wondering how this language, at times set aside by the contemporary, sometimes, instead, restricted to a form of resistance compared with other media, can continue to have its say in our present.
They have very little in common: the date of birth, Silvia was born in 1977, 108 (real name Guido) in 1978. Both city dwellers, Silvia from Cagliari, 108 from Alessandria, and yet somehow attached to the suburbs. Then Silvia chooses Milan, 108 settles down in Piedmont but travels a lot: Europe, the world. She paints female figures, very aggressive yet fragile, daughters of their and our time, the outcome of current anxieties and contradictions, in a range of styles going from Bad Painting to Reality, just as Matteo Garrone had imagined in his movie. 108 is one of the few street artists that renounces the image, the narrative system, and he could be compared to the family of abstract painting – Guido reveals he studied Kandinskij, Malevic, Bauhaus, that he loves Burri and Fontana. For the rest they are different, and exactly for this they have felt attracted to each other, because what is distant is always what interests us the most.
In any case they are two very atypical talents in the Italian scene, furthermore consistent with Antonio Colombo Arte Contemporanea’s cultural line. The usual bet, in conclusion.
Now: why this title, so evocative and enigmatic? Both flesh and not.
“The first time we met to discuss how to develop this exhibition – says Guido – Silvia found this title, from a collection of short stories by David Foster Wallace. The point is that if our work is diametrically opposed on a visual level, it springs from similar reflections on the world and on our life. Silvia expands upon these reflections by immersing herself in the more mundane aspects (of flesh). I am completely immersed in everyday life too, both when it comes to positive and negative experiences, I react by trying to transcend it, painting forms that have little to do with the real world”.
And Silvia adds “the original expression was referring to a tennis player, and it said both flesh and light. In our case, too, flesh indicates light / life, while nothing is what inevitably awaits us.
Life, boredom, superficiality, everyday life are present in my art, while in Guido’s works I have always seen the infinity of what lies ahead”.
Silvia and 108 show in Milan two series of new works: the female characters, of an unripe and unresolved femininity, along with 108’s black holes and denied spaces. Even the preparation for the exhibition draws attention to this ongoing exchange of ideas, this collaboration born from a thorough and excellently resolved dialogue.
Let’s conclude with the words of the artists: Silvia says “I like to watch human beings, how they try to spend their existence, with their frustrations and daily relationship with the neighbor. I moved away from my female perception to try to understand what brings a man closer to sexuality. My characters are connected by a constant boredom readable in their empty eyes, in contrast with the alluring attitudes, girls waiting to be chosen, and, observing, one could grasp a repetition of objects, shoes, blankets, paintings, in a setting devoid of personality”.
And Guido: “I have always been fascinated by ancient and mysterious shapes. I am thinking of a stone rough-hewn thousands of years ago that rises from the ground, so heavy and material and yet with a magical force that could immediately make me forget the world where I am in that moment. A black form in my works can appear both as a representation of an unknown physical shape or as a hole, a passage that leads to an unknown destination. The brilliance of the colors collides with the opacity of the blacks. When I paint black in geometric and rational forms, colors appear as irregular particles. But when black is a soft, heavy mass, then firm colored shapes try to bring order”.