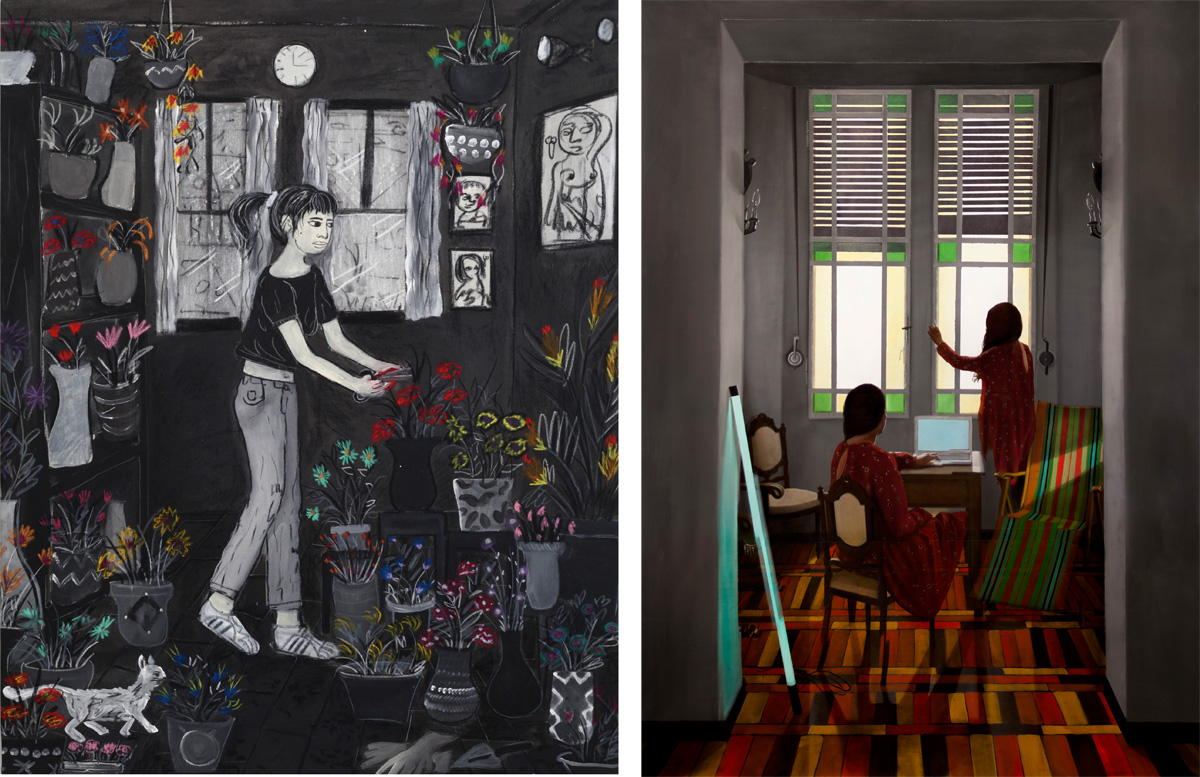 Antonio Colombo Arte Contemporanea is proud to present Everyday Is Like Sunday, the double solo exhibition of the artists Andrea Fiorino and Dario Maglionico, who represent generation Y’s new figurative painting.
The title of the show, taken from an old song by Morrisey, former leader of the English band The Smiths, it is well suited to the weekday atmospheres of Andrea Fiorino’s paintings as well as Dario Maglionico’s domestic settings. The attention to unexpected or just imperceptible aspects of everyday reality is, in fact, the only point of contact between the researches of the two artist friends, radically different in their technical and stylistic approach to painting.
The exhibition includes around thirty large and small works. There are, in fact, Dario Maglionico’s oil paintings on canvas, and the mixed technique works of Andrea Fiorino, who blends acrylics, charcoal and chalk pastels on cotton canvases and on paper.
Andrea Fiorino mixes real and imaginary stories in a painting with a strong narrative imprint, dominated by suspended atmospheres and settings marked by a subtle melancholy. The Sicilian artist paints on raw cotton canvases using an almost monochromatic palette, interrupted by quick color accents. His glance is directed to seemingly unimportant details, like a basketball, a skateboard, a portable radio or the design of a t-shirt, elements which underline the fundamentally prosaic nature of his folk tales, where the ordinary and the extraordinary seamlessly mix up. Interested in the analysis of human relationships and of friendship and sentimental bonds, Fiorino especially depicts scenes of convivial life, moments of collective leisure, pastimes and distractions of a generation grown up in the shadow of the crisis, without too many expectations towards the future.
The house is the place where Dario Maglionico’s pictorial visions are articulated. Through the perspectival multiplication of the points of view and the partial replication of figures and objects, he documents the synaesthetic origin of the perceptual processes and of those pertaining to the formation of memories. His interiors, often laid out in a theory of
oblique floors, welcome the traces of the passage of friends and family, psychic residues that, as persistent ghosts, hover between corridors and bedrooms, bathrooms and dining rooms of typically Italian homes. Reificazioni is the title of the series of paintings that, with a detailed pictorial style, at times almost photographic, document the artist’s interest in the representation of suspended atmospheres, in which the signs of past and present events synchronically converge. The light, an element already investigated in the series entitled Studi Del Buio, in the last works takes on a central role, practically radiating from every source, from windows to mirrors, from lamps to laptop screens.