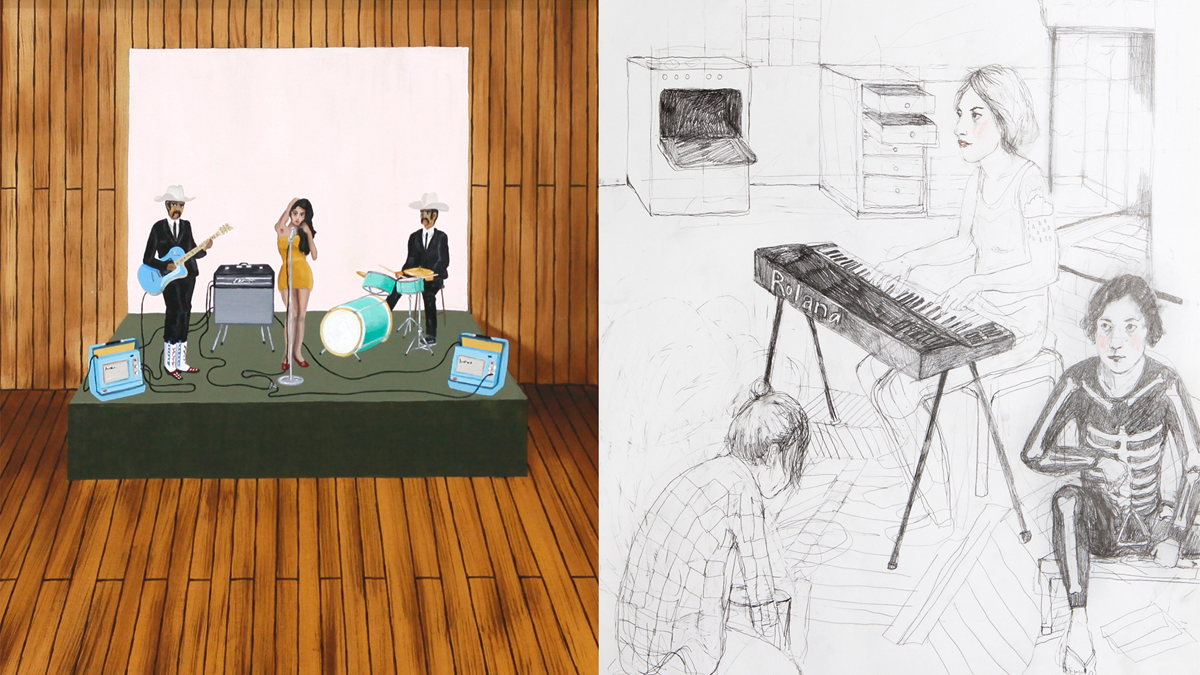 Woods where I grew up

Antonio Colombo Arte Contemporanea is proud to present Woods Where I Grew Up, the double personal exhibition of the Swedish artists Richard Johansson and Erika Nordqvist, curated by Michela D’Acquisto.
Richard Johansson, for the first time in Italy, ideally retraces the journey to North America that, during the nineteenth century, thousands of Swedes – coming from, as the artist, the rural region of Småland – have taken to escape the economic depression of those years. In the effort to preserve the memory and the sacrifices of the ancestors, Johansson draws from the events and the folk tradition of his country, using them as keys of interpretation of the contemporary society: the belonging to the Swedish working class and the promise of the American dream, but also the social inequality and the political struggle, are the themes that he tackles in his work, characterized by a naïve aesthetic and a playful impertinence. It is to the immediacy of his works that Richard Johansson entrusts the task of narrating the strongly contrasting and fragmentary history of Sweden – which so often gets intertwined with his own – using the «language but no words»[1] of the wild nature advocated by the compatriot Tomas Tranströmer, Nobel prize for literature in 2011.
On the occasion of her second show in the spaces of Antonio Colombo Arte Contemporanea, Erika Nordqvist continues to appropriate the reality of her surroundings through drawing. The creative process that distinguishes her works is always visible, at every phase, on the white paper: the initial state of uncertainty, marked by evident erasures, soon leaves space to increasingly confident signs, as if the artist was able to acquire consciousness of the world only by drawing it. And the rarefied world that Nordqvist conjures is nothing but a stage in the thick of the woods – one of those woods where our artists grew up. «In the middle of the forest there’s an unexpected clearing that can only be found by those who have gotten lost»[2] , and Erika Nordqvist’s characters, perpetually hovering between existing and fading away, certainly seem to know this place.
On show paintings, large-format works on paper, and bronze and wooden sculptures.

Richard Johansson
Born in 1966 in the Swedish province of Småland, Richard Johansson studied art at the Konstskolan Forum in Malmö after working for years as a craftsman.
He lives and works in Sweden with his wife, the artist Mette Bjornberg, and their three daughters.
Selected solo exhibitions: 2016, “Elvis Is Dead, But Kenny Rogers…”, Little Finger Gallery, Malmö; 2015, “51st State”, Galleri Magnus Karlsson, Stockholm; 2013, “East Goes West”, Galleri Thomas Wallner, Simris.
Selected group shows: 2016, “Per Gustavsson, Richard Johansson & Pierre Sandgren”, Galleri PS, Göteborg; 2015, “Polyfoni 3”, Galleri Thomas Wallner, Simris; 2014, “2014 – An Exhibition Of Current Interest”, Galleri Magnus Karlsson, Stockholm.
Many are the public works commissioned to him by the Swedish government.
Erika Nordqvist
Born and raised on a farm in Sweden, Erika Nordqvist studied art in England, first at the Arts Institute in Bournemouth (BA Hons Fine Art) and then at Slade School Of Art in London (MFA Painting).
She lives and works in Sweden.