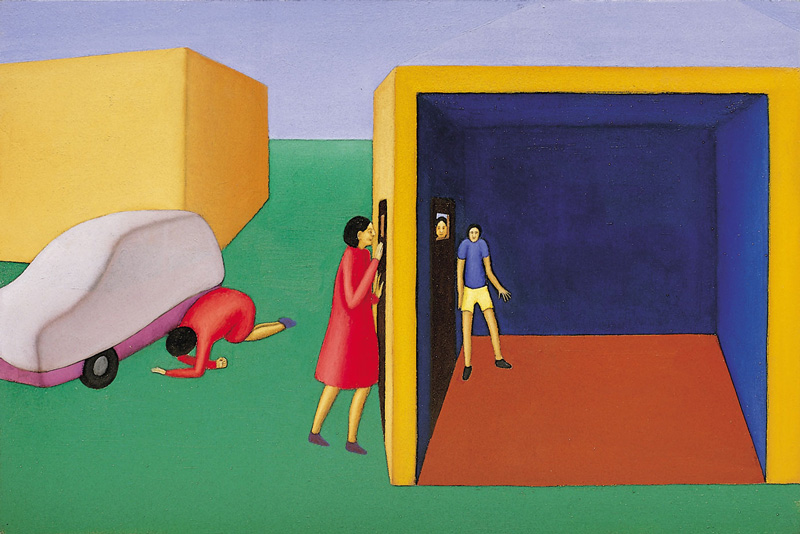 The protagonists of research on painting in recent years seem to be those artists who operate on the borderline that is created between languages and styles, in a dialogue with the image and what may lie beyond it, utilizing metaphors and symbols to restore vigor to the narrative matrix of painting itself.
Pietro Capogrosso and Giuliano Guatta, both born in 1967, represent completely different approaches and solutions to the medium, but somehow share a sensibility that attempts to “look beyond” the confines of the painting.
Pietro Capogrosso always starts with something real, or with the way a real fact has been recorded in his memory: a landscape, a road, a corner seen in passing. The element from reality becomes an opportunity to reflect on the transparency and the ineffable nature of painting. His new cycle of works made in 2001 bears the title “Diafano”, indicating an even more subtle, powdery use of material, with light colors in which what remains of the image treads the borderline between realism and abstraction.
Giuliano Guatta confirms his role as a refined writer of painted short stories. Rather than a single painting Guatta chooses the polyptych, or in any case a more complex structure, with which to make his continuing investigations between the ordinary and the extraordinary, memory and metaphor. The themes and suggestions that recur are those of falling and climbing back up, of the precipice and the ascent. Often there is something burning, a sense of drowning, a cry that demands attention, but all these images also convey a tone of comedy in the face of existential drama that is not free of sarcasm.