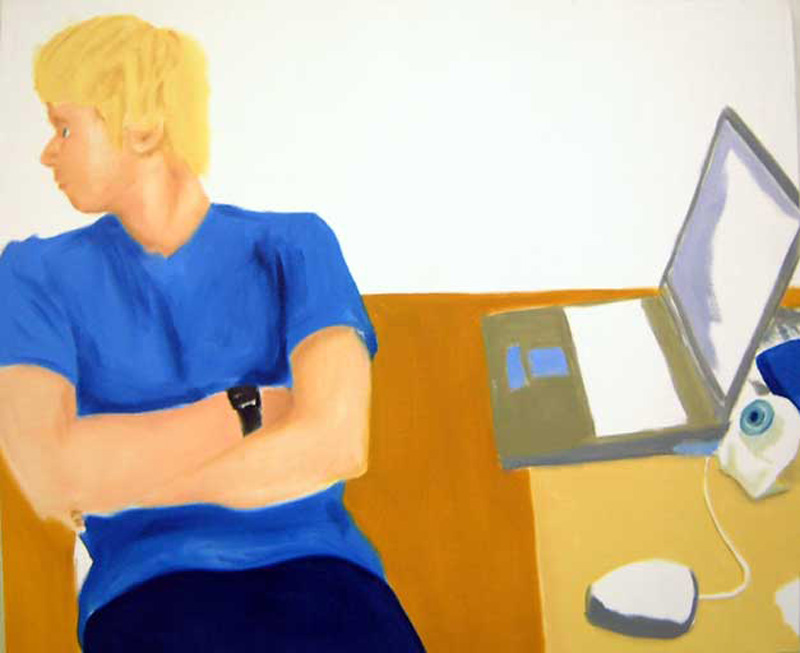 Miltos Manetas is an artist, born in Athens in 1964, artistic training in Italy, studies at the Fine Arts Academy of Brera in Milan. After a few years in Milan he moved to the United States, where he lives today (in New York and Los Angeles).
The focus of his research is an attention aimed at media and images of the most advanced technology. While Pop Art focused on television, advertising and consumer goods, Manetas looks at the computer screen and its contents, exploring the virtual world of the Internet. Even when he uses traditional techniques like painting, renewing them in an unprecedented way, he makes such means of communication the subject of the representation itself. His canvases and his photographic works, which he calls, “vibracolours”, are populated by cell phones, mouses, connector wires, screens… An emblematic case, in this series of works that are true portraits, is the work “Powerbook” in which he portrays the surface of the cover of the computer seen from above, offering us a simultaneously figurative and abstract image.
The world of the computer is closely connected to the world of video games, on which Manetas has recently concentrated particular attention, making use of images such as those of Lara Croft. At the moment the favorite subject is that of the Pokemons, the latest cult cartoon of the new kids. The artist explains: “The Pokemon story is a tale without references: you can’t link them to the rest of the visual landscape. Evidently this is a Japanese story that we interpret in an occidental manner, without knowing much about Japan… but that isn’t important, in fact it is a positive thing to transform cultural objects… especially because, in the case of the Pokemons, instead of the battles what is important is their evolution, that is what they win when the defeat another Pokemon… in triumph they too become another Pokemon”.
With an attitude similar to that of Warhol, a sort of “easy-going” relationship with art, he says: “Since I don’t like the term ‘contemporary art’, I asked an agency in California, called LEXICON, to find me a new word. This is the agency that invented words like Powerbook or Pentium. For 100,000 dollars you can buy a new word”. The new word is “Neen”, a mental state as the artist himself defines it, that describes the new generations, the generations of the “neensters”, connected to the Pokemon culture.

Miltos Manetas (1964, Athens) has shown his works in many group shows and solo exhibitions in galleries and museums all over the world. Important solo shows include: recent exhibitions at the Analix Gallery in Geneva, the Center for the Contemporary Image in Geneva, the National Museum of Contemporary Art in Athens, the Almine Rech Gallery of Paris, and “?word” at Gagosian in New York. In 1999, exhibitions at Lux Gallery in London, Lawing Gallery in Houston, Texas, Rebecca Camhi Gallery in Athens. He has also worked with Postmasters Gallery in New York, Galerie Philippe Rizzo in Paris, Dan Bernier in Los Angeles, New Santandrea in Savona, Galleria Giò Marconi in Milan, Raucci & Santamaria in Naples, Galleria FacSimile in Milan and Galleria Il Capricorno in Venice.
Among the many group shows in which he has taken part: in 2000 “Elysian Fields” at Centre Pompidou in Paris, “Presumed Innocent” at CAPC in Bordeaux, “PICT” at the Center for Contemporary Art in Banff, Canada, “Il sentimento del 2000” at the Milan Triennale. Previously his works were featured in group shows at the Museum of Contemporary Art of Chicago, P.S.1 and the Guggenheim in New York, at Fondation Cartier in Cahors and Palazzo Reale in Caserta, as well as the Trevi Flash Art Museum in Trevi.