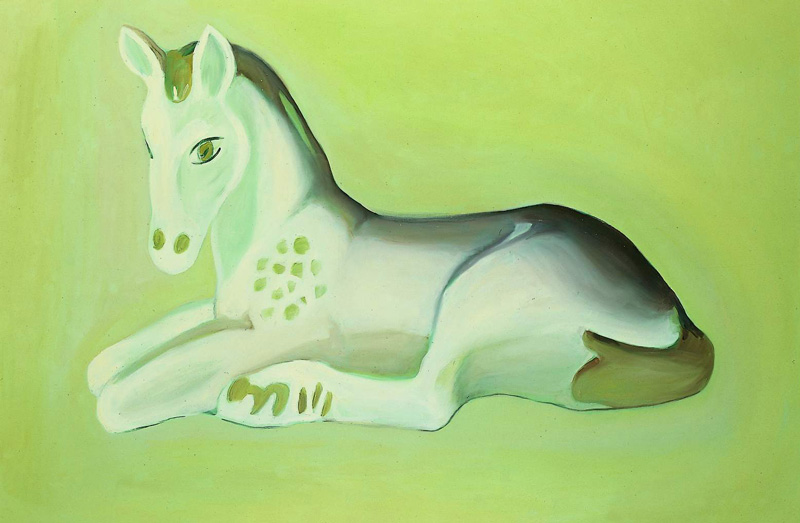 The Antonio Colombo gallery presents Love Me Tender, the first solo show in Milan by Lorenzo Scotto di Luzio.
The title Love me tender refers, of course, to the famous track by the legendary Elvis in 1956, and it is also the title of one of the main works in the show: an enlargement of four ID-format photos of Lorenzo Scotto himself, in a desperate pose.
The true introduction to the exhibition is Tutto il tempo che ho sprecato (All the time I’ve wasted), the installation that fills the entire upper level of the gallery, in which ceiling fans spin and uselessly agitate the air over the heads of the visitors. The show continues with a series of microevents that interweave without separations, ranging from the video I Will Survive, in which Scotto sings the song made famous by Gloria Gaynor as he absurdly grapples with objects, including the machine that shoots cigarette butts, Smoking and Drinking, the mocking mechanical parody of the most classic gesture of the American film hero.
Born in Pozzuoli in 1972, where he lives, Scotto is one of the most interesting artists of the Neapolitan new wave, hitting the scene toward the end of the 1990s.
His work is governed by the need for continuous mobility among languages, permitting him to move with ease from drawing to video, installation to photography.
But the greatest impact on spectators has been achieved by his mechanisms, constructed with whatever is handy, performing paradoxical functions.
From No Expectations, the machine that “deals” playing cards, to Big Mama, the buffet full of knick-knacks shaken by washing machine motors concealed inside it, Scotto enacts paradigmatic situations, forcing reality to adapt to the paradoxes of the dimension of imagination.
The light irony found in all his imagery and mechanisms is accompanied, on the other hand, by a heavy side, that sense of uncertainty that lurks just below the surface of appearances, conditioning our everyday relationship with reality.
The exhibition is accompanied by a catalogue with a text by the curator Raffaele Gavarro and a conversation between the artist and Gigiotto Del Vecchio.