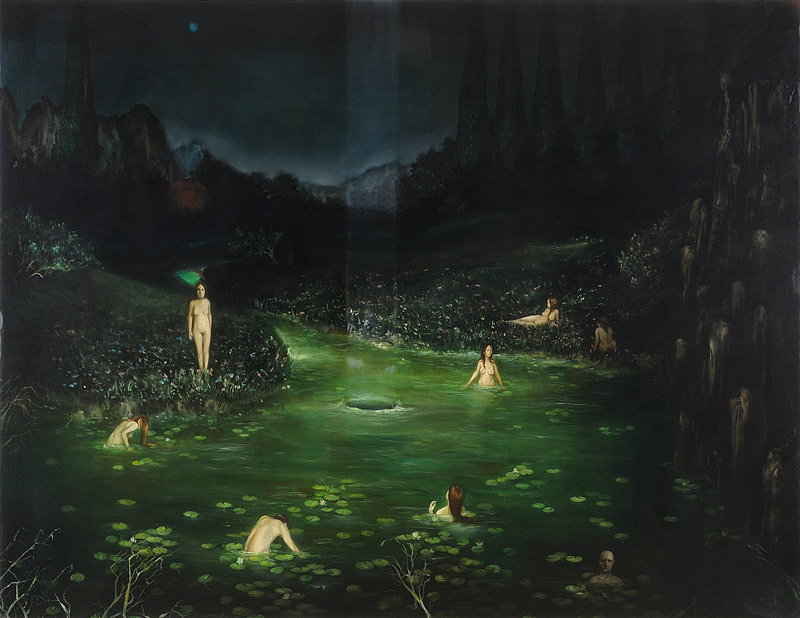 “Biedermeier was a style that spread through Europe in the mid-1800s, in opposition to the pomp of the Empire Style. The term, but with a negative connotation, comes from a character created by the writers Adolf Kussmaul and Ludwig Eichrodt, the embodiment of the apolitical, conservative petit bourgeois, interested only in family life. It is a compound word based on two terms, the adjective Bieder, which means simple, and Meier, one of the most widespread German surnames.

The characters of Giuliano Sale are extreme subjects, hypertrophic borderline cases, decadent drop-outs that express just the opposite of the values of the Biedermaier. Somehow, their folly springs precisely from lack of acceptance of balanced petit bourgeois morals. So Biedermeier is an ironic title, asserting a concept that is just the opposite of what the artist intends to represent, leaving it up to the observer to grasp the substantial ambiguity of the assertion.

What Giuliano Sale depicts is a distorted, unhealthy version of pale Pre-Raphaelite beauty. His virgins, placidly positioned against the backdrop of sinister romantic landscapes, with eternal leaden skies, remind us of the anemic heroines of gothic novels, or a story by Edgar Allan Poe. The iconography of a certain minor, borderline symbolist painting is revived, in fact, in the artist’s imagery, using it to represent the spiritual drift of contemporary mankind.”

Giuliano Sale was born in Cagliari in 1977. He lives and works in Milan.

My humanity does not consist in the fact that I sympathize with the feelings of my fellows, but that I can endure that very sympathy.

What is a “contemporary” man? One who would like to kill us, without really knowing how.

Art bears witness to its time. How often have we heard this statement! But what does it really mean? Bearing witness to one’s time is a controversial action. Some might see that witnessing as a transcription or, in the best of cases, an interpretation of the tensions and urgencies of the contemporary world. As in the case of an artist who observes the world and the society in which he lives, formulating thoughts about them and translating those thoughts into the artistic language most congenial for him. This type of artist resembles a reporter, rooted in a specific temporal dimension characterized by forms, objects, atmospheres, settings that immediately connect us to the present in which we are immersed. This is the most immediate way of bearing witness to one’s time. Then there is another, more reticent, indirect, lateral way of looking at the day and age, paying attention to what is not so evident and tangible, but determines the distinctive features of an era in a substantial manner. Giuliano Sale belongs to this second category of artists, who prefer to focus not on external, phenomenal, we might even say optical reality, but on the untranslatable reality of inner drives, impulses, fears and intuitions. Nothing could be further from the painting of Giuliano Sale that the expressions that stick close to reality in an imitative, epidermic way, placing the evident signs of the contemporary world on canvas in the form of personalities, scenes, environments, even recognizable, easily decipherable ideas. Instead, the painting of Giuliano Sale resembles that of another age, suspended between the Romantic 1800s and the Expressionist 1900s, an age in which we can see traces of a certain macabre symbolism, of Northern European origin, but also of lots of genre and landscape painting, which he amplifies and dilates to the point of transfiguration. The persistence of traditional iconographic themes and topoi in Sale’s painting responds, in fact, to an inner need to come to grips with the masters of the past, especially with those who have represented a turning point in the romantic, anti-classical conception of history. The extenuated symbolism of the Pre-Raphaelites and the French and Belgian painters of the late 1800s, like the dark, dusky atmospheres of early Expressionism, form the starting point of a hypothetical trajectory of abolition of the classical sense of harmony and balance.

Giuliano Sale associates this obsession with positive values with Biedermeier, a style that spread in Europe in the mid-1800s, opposed to the pompous tone of the Empire Style. The term, with negative connotations, comes from a character created by the writers Adolf Kussmaul and Ludwig Eichrodt, the embodiment of the apolitical, conservative petit bourgeois, interested only in family life. It is a compound word based on two terms, the adjective Bieder, which means simple, and Meier, one of the most widespread German surnames. On the other hand, the characters of Giuliano Sale are extreme subjects, hypertrophic borderline cases, decadent drop-outs that express just the opposite of the values of the Biedermaier. Somehow, their folly springs precisely from lack of acceptance of balanced petit bourgeois morals. Biedermeier is used, in this case, as a euphemism, an assertion of a concept that is the opposite of what the artist intends to represent.

The interest in deformity and imperfection, excess and imbalance then, translates into the description of destabilizing subjects, scenarios that prompt a sensation of gloomy anguish. One example of this attitude is found in the reversed interpretation of the Arcadian landscape, traditionally associated with a sense of quiet serenity. The dusky, desolate regions of Sale are, in fact, places where gloomy apparitions loom, full of sinister forebodings, where Nature seems like a restless, threatening entity. Amidst dark expanses and lugubrious highlands, always menaced by leaden or bloody skies, Sale arranges a series of epiphanic, almost spectral figures that the landscape drowns in a shadowy space. In this “breathless, livid, shuddering land”, oppressed by a “cumbered, tragic sky in disarray”, as in Pascoli, portraits of dismayed[1], dumbfounded men and women are aligned.

Precisely the genre of the portrait provides the artist with the opportunity to investigate the dimension of the unspeakable and the impossible to translate. Fear and fascination of death, suffering and passion of existence, the most sudden shifts of spirit and psyche, unconfessable impulses, unnamable yearnings and lascivious urges, everything – in short – that dwells in shadow and yet determines the human adventure, dominates the center of Sale’s painting. In formal terms, the reminiscence of the stylemes of a certain minor Symbolism becomes an effective tool to describe the spiritual drift of humanity. One of the most significant aspects of Sale’s work, in fact, is its latent narrative bent. In his paintings, everyday life mingles with the supernatural, in an unfolding of disorienting situations that leave room for multiple interpretations.

It is never clear, in fact, just what motivates his characters, often engaged in ambiguous actions of elusive meaning, suspended between ritual and crime, between the immodest and the obscene. Even the most apparently banal, prosaic events, filtered by the artist’s painting, reveal a sensibility attuned to drama that urges the viewer to find extraordinary, eccentric interpretations for the depicted events. “Drama”, as Alfred Hitchcock said, is simply “life with the dull parts cut out of it”.

Another fundamental element of the art of Sale is the use of painting as a form of introspection, a means of personal study that transforms his research into a voyage of discovering, a wayfaring path full of pitfalls and revisions, obstacles and revelations that reveal the epiphanic nature of his imaginary. Passing through doubts and illuminations, in a wandering that skirts inadequacy and fragility while boosting the expressive force of intuitions, the artist seems to subject his activity to constant assessment, testing its honesty and necessity. The result is an essential, morphologically terse style, but intense and concentrated, from which a tension toward the sublime emerges, and an interest in everything that is psychologically ambiguous or even despicable.

Precisely in this focus, this capacity to grasp what invisibly seethes in the atemporal dimension of human consciousness, Giuliano Sale demonstrates that he is an artist of the present. After all, as André Gide wrote, “the present would be pregnant with all futures, had the past had not already projected its history into it” [2].