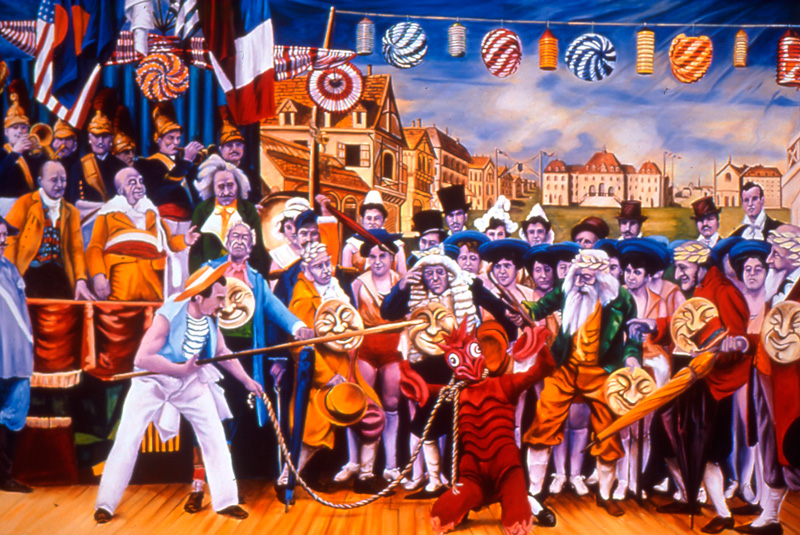 Since the end of the 1980s Gabriele Di Matteo has been investigating the functional mechanisms of imagery and the conditions for the existence of creative expression in the contemporary society of communication. His main medium of expression is painting. He pays close attention to the relationship between the image and its creator, the author’s right to continue to see himself as a creator in the case of images that are able, at this point, to transcend us with ease, accessible to all and therefore subject to consideration as collective creation.
For the Antonio Colombo gallery Di Matteo has further developed a project seen for the first time in the solo show Tableaux Vivants. Prenez garde à la peinture, organized last spring by the Frac Bretagne of Rennes and Le Gran Café of Saint-Nazaire. This new project focuses on Georges Méliès, the French filmmaker from the early 1900s, considered one of the founding fathers of cinema, a magician, a sorceror of images and forerunner of special effects and the Hollywood “blockbuster”. Di Matteo has produced a new version of the masterpiece of Méliès Voyage dans la lune (1902), entitled Voyage sur la Terre (the film is produced by Frac Bretagne, Frac Limousin and Le Gran Café of Saint-Nazaire). The hypothetical trip to the earth of five creatures from the moon, or Selenites, is gradually transformed into an encounter with the artist, Gabriele Di Matteo, in a voyage of discovery of his way of painting. From this project in progress, the gallery will present several paintings that recreate still on-set photos from the original film by Méliès, and photos taken during the shooting of the new version.
Retracing the process of the making of the films, through the images, on the threshold between the copy and the original, we enter the world of Méliès-Di Matteo, literally setting foot in the studios of the director and the artist, non-places where the image is staged: at this point it becomes an opportuunity for a self-portrait of the artist in the act of preparing, arranging and giving form to the image. The choice of the historical figure of Méliès, who was the victim of true acts of piracy through the uncontrolled copying of his masterpiece, is no coincidence, reflecting a sense of tragic, emblematic destiny already present in the cycles of Di Matteo on Arafat (Arafat, 1996), Jorge Luis Borges (Blind Man, 1998) and nude figures (Nuda umanità, 2000).
For the exhibition, there will be an official premiere presentation of the catalogue produced by FRAC Bretagne and Le Gran Café, with the collaboration of Galleria Colombo, accompanied by a critical essay by Roberto Pinto. A poster will also be produced, a traditional tool of communications for films, with a critical text by Andrea Viliani exploring the meaning of the artist’s research in relation to contemporary painting, and in the light of the problematic issues of copyrights and their implications in an advanced society of communications.