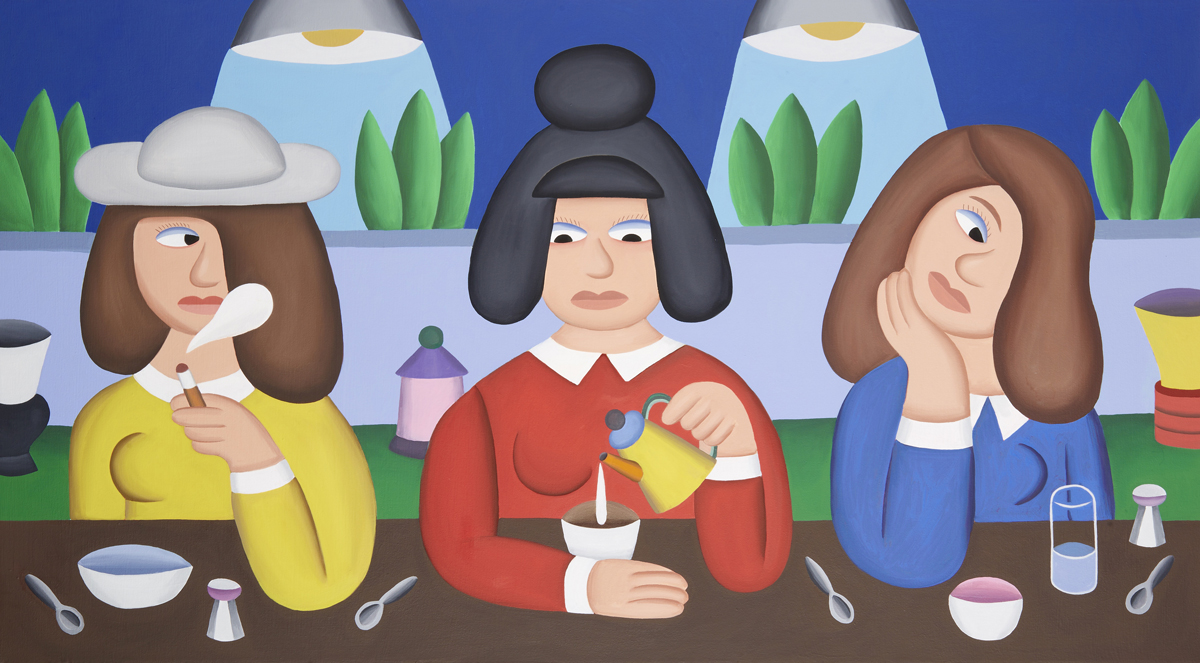 Antonio Colombo Arte Contemporanea is proud to present The Age Of Innocence, the double personal exhibition of the artists Fulvia Mendini and Andy Rementer, joined together by a linear and synthetic painting that combines the taste for illustration with a series of references to the history of art. In fact, both have developed a style characterized by a polished formal simplification and the use of a bright color palette, reminiscent of illustrated children’s stories, that evokes the memory of a lost innocence.

American, native of New Jersey, Andy Rementer studied graphic design at the University Of The Arts in Philadelphia and worked as an illustrator and cartoonist for newspapers such as the New York Times, the New Yorker, Apartamento Magazine and Creative Review, while, as an animator, he collaborated with the broadcasting company MTV and the film studio Warner Bros. He has worked for two years in Treviso at Fabrica, the Benetton Group’s communications research center, along with a handful of international researchers specialized in graphic design, photography, video, music and journalism. During his two-year stay in Italy, the artist has developed a peculiar visual language inspired not only by design, comics and cartoons, but also by European art, from Romanesque art to the twentieth-century magical realism. In Rementer’s works, the urban landscape is the backdrop for a series of quick tales, ordinary stories that, however, reveal the extraordinary nature of the everyday experience.

After studying graphic design and Illustration at the European Institute Of Design in Milan, Fulvia Mendini worked at the Atelier Mendini and, in parallel, developed her own pictorial and decorative research, focusing in particular on the portrait and on the world of natural forms. A versatile artist, Mendini collaborated with artisans and companies, making potteries, sculptures, carpets, murals, jewelry and handbags. Her painting, characterized by a frontal and hieratic setting, filled with erudite citations, is the result of a refined mixture of graphic and artistic styles. If in her modern Madonne the influence of Renaissance painting – from Giovanni Bellini to Piero Della Francesca, from Pisanello to
Paolo Uccello – is undeniable, in the most recent portraits, besides the obvious influence of Pre-Raphaelite and Symbolist iconography, emerges, for the first time, the interest in the natural landscape, where the artist reinterprets the lesson of the Douanier Rousseau, positioning it in an Arcadian dimension populated by nymphs and fairies.
The Age Of Innocence compares Rementer’s urban tales to Mendini’s Edenic allegories, drawing attention to their shared graphic matrix, the terse tendency and the predilection for flat colors and bright hues. In fact, both artists build a hypothetical and sublimated world, dominated by geometry, where characters, objects and places, just like in Abbot’s Flatlandia, pave the way to the discovery of additional, multiple dimensions. On show are about thirty works, including drawings, watercolors and paintings by Andy Rementer and acrylics on canvas, panel and paper by Fulvia Mendini.

FULVIA MENDINI was born in 1966 in Milan, where she lives and works.
After studying illustration and graphic design at the European Institute Of Design, she worked at the Atelier Mendini, collaborating with various companies. Later she developed her own pictorial and decorative research, focusing in particular on the portrait and on the natural world.
She exhibited her work at the Grand Palais in Paris; at the Taejon Expo International in Korea; at the Triennale Museum in Milan and at the galleries: Luis Adelantado in Valencia, Antonio Colombo Arte Contemporanea in Milan, San Salvatore in Modena, Delle Battaglie in Brescia, Angel Art in Milan, Spazio Etro in Milan, Byblos Art Gallery in Verona, Roberta Lietti Arte Contemporanea in Como and Galleria Armory Arte in Perugia. In 2009 she took part in the Prague Biennale.
Chiara Canali, Lorenzo Canova, Mauro Corradini, Raffaella Guidobono, Fulvio Irace, Norma Mangione, Loredana Parmesani, Ivan Quaroni and Alessandro Riva wrote about her work.
She made potteries in Vietri, designed a collection of handbags for Yoox, and designs jewelry. She is in the permanent collection of the Byblos Art Hotel in Verona with some of her paintings and her mosaic works are installed in the stations of the new Naples subway designed by the Atelier Mendini.

ANDY REMENTER (USA, 1981. Lives and works in Philadephia) is an award winning Graphic Artist from USA. He grew up in a Victorian beach town where an early xposure to the sun faded, local signage educated his love of type and hand-painted lettering. A sense of timelessness and nostalgia permeate his visual world. Another reoccurring theme of Rementer’s work is isolation, something he cites as an effect of his abrupt relocation to an urban environment in formative years and often depicted in his work through his characters’ underlying unease. He graduated from The University of the Arts in 2004. After working with Fabrica in northern Italy, he relocated to the East Coast where he divides his time between drawing, painting, and storytelling. His colorful and vibrant work has been featured through a variety of sources including an ongoing collaboration with Apartamento Magazine, The New York Times, MTV, The New Yorker, Le Monde, New York Magazine and Creative Review. He has exhibited his art in solo and group shows in Europe, USA and Asia.