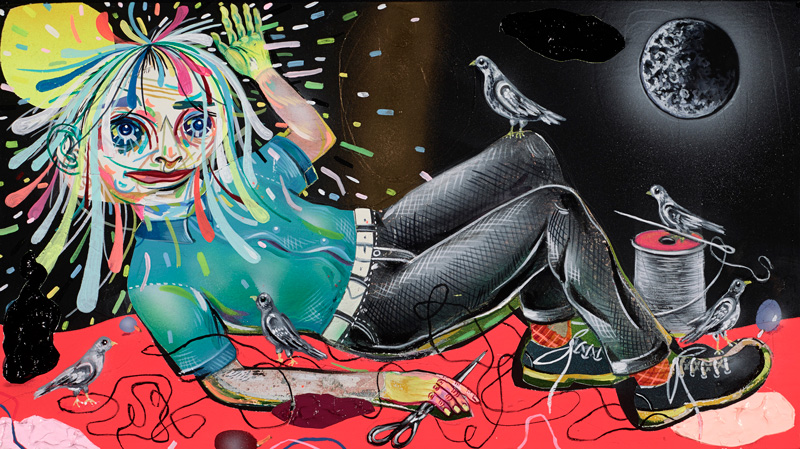 Antonio Colombo Arte Contemporanea is proud to present I’m OK, the first solo (actually duo) show in Italy by the Clayton Brothers, who are among the most important exponents of Pop Surrealism, an art movement that began in the United States in the 1990s, in a return to the original American pop imaginary, mixing art, underground comics, music, psychedelia, punk, surf and skate culture, cartoons and folk art in a lively and variegated concentrate.
The art of the Clayton Brothers represents one of the most original and eccentric contributions to the Lowbrow galaxy today, giving rise to a unique visual universe in which neo-expressionist overtones, narrative and abstract drifts and pop attitudes all converge.
I’m OK includes about 30 new works of painting, drawing and sculpture, specifically made for this show, all focusing on analysis of the relationship between the work and the observer, which is one of the central themes of their research, defined as a sort of “abstract narrative” constructed by reworking characters, situations and circumstances gleaned from everyday experiences.
“With this new set of works,” the artists say, “we want to present a vast group of fragmented images that are abstract and narrative at the same time.” The goal is to encourage the viewer to reflect on a universal question – how are you? – to trigger thoughts about the mental and physical state of everyone. Nevertheless, Rob and Chris also warn us that no method exists for deciphering their works. It is up to viewers to reconstruct a story, starting with their own emotional state.
For Rob and Christian Clayton, collaboration is something more than a mere process. It is more like the result of a creative symbiosis that consists of constructing intuitive narratives, without any predetermined plot.
The Clayton Brothers, in fact, paint simultaneously, taking turns with interventions on works through a method that leaves plenty of room for the improvisation and imagination of both. “The process of production of our works is never the same,” the brothers explain, “because we allow our characters to construct themselves, day by day, which is exactly what happens in relationships that are constructed over time.”
The results are visual representations of pure energy, where the impressions of everyday life are translated in an explosive vortex of bright, psychedelic colors. Their aim is to transfer, through their art, individual experiences into a collective, global dimension, thus conveying an accurate image of contemporary America.
“We see these images as a reflection of ourselves,” Rob and Chris say, “but also of our neighbors, our friends and families. In short, they are a reflection of the world around us.”
The exhibition catalogue, with an essay by Ivan Quaroni, will be available at the gallery.

Rob (1963, Dayton, Ohio) and Christian (1967, Denver, Colorado) Clayton studied at the Art Center College of Design of Pasadena (California), graduating with honors. They have had important solo shows at the Musee de la Halle Saint Pierre in Paris (2013), the Pasadena Museum of Art (2011) and the Madison Museum of Contemporary Art (2010), and in many galleries in Los Angeles, New York, Houston, Santa Monica and Beijing (China). Their works have also be featured in group shows at the Santa Monica Museum of Art (Incognito, 2010), the Laguna Art Museum of Laguna Beach (In the Land of Retinal Delights, 2008) and the Marianna Kistler Beach Museum of Art in Manhattan, Kansas (BLAB! A Retrospective, 2008), as well as major international art fairs like Art Basel, in Switzerland, in 2009 and 2010, and the Armory Show in New York in 2006 and 2007.

From the Cadavre exquis to Expanded Painting.

The Beauty is in the Detail

Statements by painters about their own poetics are often enlightening because although they hang on to an evocative, non-didactic quality, they also manage to be precise, immediately making the particular characteristics of their art visible. The Clayton Brothers define their art as “abstract narrative,” which is a clear interpretation of their painting in which color and lines form the space where, unlike the modernist grid, facts and events – and therefore narratives – can happen.
Stories have long been banished from avant-garde art, in favor of analysis of the language and praxis of painting, eliminating details and particulars, as if painting, in order to be accepted, had to be two-dimensional, like a logo, a message. Instead, an art linked to “perspective vision” in the Renaissance sense has been taken forward by comics, resisting the modernist demolition to embrace the Michelangelism of the Marvel superheroes. The connection between the Clayton Brothers and comics is clear, yet I also think back on the American tradition of painting, and especially the works of Joseph Stella in which colors and lines evoke stories, while making them geometric and abstract. Or Stuart Davis, who breaks up the Cubist matrix to introduce the timbric overlays of the American cityscape in the two-dimensional field. The other reference is Francis Picabia in the period of the period of the overlapping faces, and to complete the range I also think about Paul Cadmus, for the grotesque impact of the characters and the surreal, monstrifying interweaving of reality. Certainly the painting of the Claytons sums up all the “junkie” qualities, and this is the right way to revitalize art, subjecting the high model to the dissonant encounter with low, provocative contemporary impact. Another American painter who has successful put this “lowering” into practice is Larry Pittman, the great builder of cuts and cutouts of imagery. It has long been thought that painting should proceed by subtraction, but instead, and luckily, the painting of the Clayton Brothers practices the erotic seduction of accumulation. Just as reality is a party for the eyes, so their paintings are a party for the history of painting.