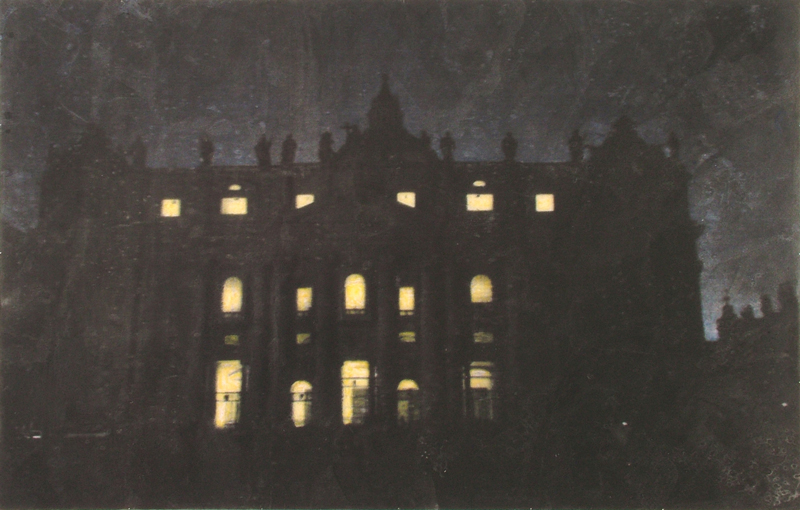 Tuesday 22 May at 7 PM the upper space at Antonio Colombo Arte Contemporanea presents the video installation by Andrea Aquilanti entitled INCANTO.
This is a special event, curated by Raffaele Gavarro, lasting five days, featuring a central work in the solo show by Aquilanti held in Rome at Galleria Oddi Baglioni in October-November 2000.
INCANTO is a video projected on a wall on which the image has been almost entirely drawn. The projection is superimposed on the image.
“A fixed video camera positioned to record a segment of urban archaeological landscape for about two hours. Tourists arrive, descend the stairs and cross the space of the video frame, to begin the classic visitor’s itinerary. We might say that this is a scene from life, or a stage, a ‘live’ recording of life. Anything or nothing could happen during these two hours. The recorded images, on their own, contain nothing to attract our attention, the video is completely without those characteristics that, in everyday experience, would be necessary to make us record, if only for an instant, a scene in our brain. The image projected on the wall is made even more anonymous by its reduction to black & white that is the result of a simple low-tech effect. The image vibrates delicately and silently, as you try to see it better, by approaching closer. As you do so you inevitably find yourself between the projector and the wall, and your shadow, as it blocks the image, reveals a subterranean secret: most of the image is also drawn on the wall. You move away, and the projection returns, adhering to the image on the wall.”
From Raffaele Gavarro, “L’incanto come desiderio etico”, catalogue essay, Oct-Nov 2000, Rome.

Andrea Aquilanti, (born in Rome in 1960, where he lives and works) – Solo shows: Galleria Oddi Baglioni of Rome in 2000 and ‘97, 1999 at La Sapienza, Rome, 1998 at Galleria Weber, Turin. Main group shows: 2001 at the Galleria Comunale di Arte Moderna e Contemporanea in Rome, 2000 at Museo Pecci in Prato, Castello Piccolomini in Celano, 1999 at the former Baiocchi Clinic in Pescara, and at the galleries Il Segno and Dei Banchi Nuovi in Rome. 1997 and ’98 at the Ex Mattatoio in Rome.