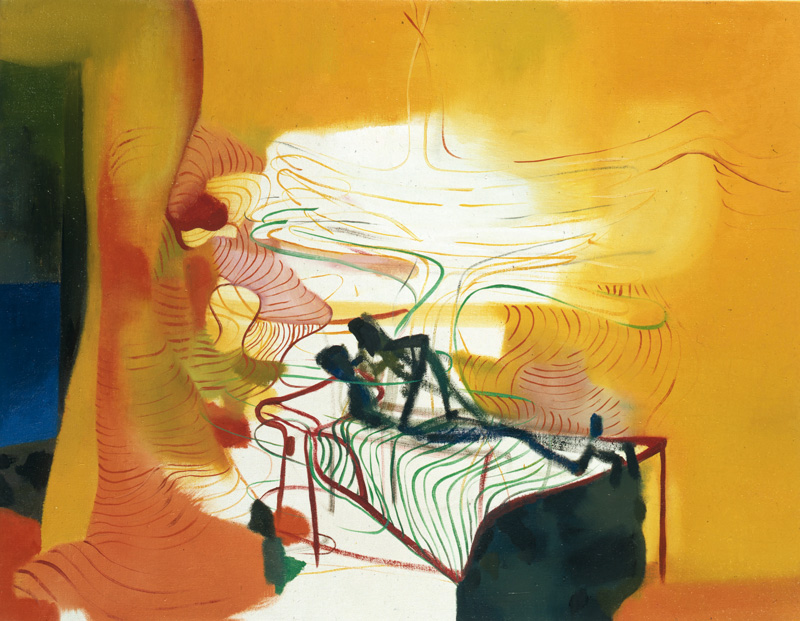 I was born in Como in 1961. Since 1978 I have lived in Milan. My last show in Milan was in 1989, and then I just waited, arms folded, for the arrival of a gallery where my works wanted to go. Finally, after travels around Italy and the world, I have found that gallery. And very soon I’VE GOT A DATE.
I am a painter and I think of painting not as just one medium among many, but as THE objective: the basic instinct of the artist is to change painting. Society does the job of changing the subjects and the images: to change painting is more difficult, and that’s where the artist comes in. The Painter becomes God’s Partner in the mystery of creation. My greatest passions are the Bible and crime reporting, or true confessions. The text of the sacred scrip-tures is the greatest crime chronicle ever written: murders, betray-als, love and pardon, displaying the immutable features of man. Just the deeds, or the misdeeds, as in melodrama, contain the maximum concentration of spirituality. This is where I start when I make my paintings.
At the beginning of the Nineties I painted “The assassination attempt on the Pope”, “The recovery of the body of Aldo Moro”, or the series of “Interviews” filled with personalities compressed into an airless space.
Over the last few years the style has slowly changed, and in the latest paintings the structure is no longer sought in drawing, but constructed by means of color. Enormous fields of red offer a background for particles of pure color, where even shadow becomes light. The image is constructed only through painting, as if the painting had taken form on its own. This is the story of the large paintings of the last few years, like “St. Luke tries to paint”, where a rain of atoms attempts to cause the apparition of the visage of the Virgin on the canvas; or the saga “Jacob struggles against the angel”, wrapped in the spiral of technological DNA.
For the show in Milan I am making a large-format work in which a couple in love is surrounded by virtuoso color combinations: she is very beautiful and expects a child, he is strong and tender and together they gaze, in awe, at the design of the sky. In “Observa-tory” some couples busy with erotic effusions are immersed and enveloped, here too, by stars and the sky. Instead in “Maria Callas in Via della Spiga” there is a very solid architecture where the Divine Voice presents herself to the audience, with all her stage personalities. In short, I am finishing other paintings, and I’m not sure exactly where they will lead me. As you may know, in painting the only part of the body that really counts is the wrist. It is here that the mystery of creation is concealed, sometimes a gentle caress, sometimes a fist: you’ll find them both in the show at Antonio Colombo Gallery. Don’t forget: you’ve got a date!
P.S. I am very pleased be collaborating with the writer Aldo Nove for the realization of the catalog of this show. He is writing a “very dense” text, and I keep him nourished with Champagne and erotic tales, in which I am very well-versed. Aldo Nove, as you all surely know, is an exceptional writer, and above all he is also famous on television. In any case, his latest book is “Puerto Plata Market”, published by Einaudi, but in October a new and indubi-tably “very dense” novel will be released.

Marco Cingolani has taken part in many exhibitions in Italy and abroad, including one-man shows at the Galerie Raab in Berlin (1998), at the Museo Laboratorio of the La Sapienza University in Rome (1997), at the gallery of Emilio Mazzoli in Modena (1995) and at Analix, Geneva (1993). His work has been featured in group shows in Salzburg and at the S.M.A.K. Museum of Ghent (1998), the PAC in Milan (1998), at Galleria Continua in San Gimignano (1997), at the Contemporary Art Museum of Seoul and the Eleftherias Center of Athens (1996), along with other shows in Valencia, Vienna, Nicosia and Madrid.