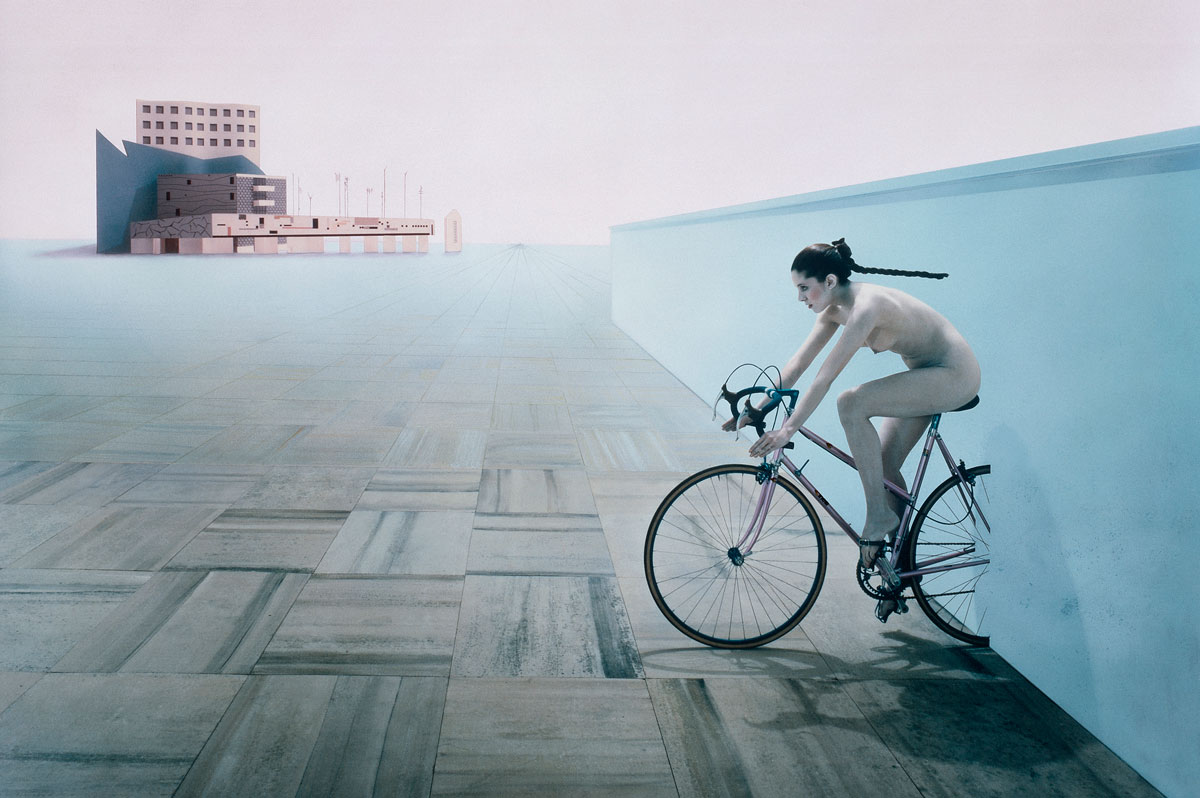 COLUMBUS CONTINUUM continues the exploration of the eclectic character of Columbus, the Italian metallurgy firm specializing in the production and shaping of metal tubing and its various applications, presenting the third exhibition of the centenary celebrations on 24 September: Traguardo Volante. Columbus e Cinelli tra arte e bicicletta (Flying Finish Line. Columbus and Cinelli: art and bicycles), curated by Luca Beatrice.

In the dictionary of cycling, traguardo volante means an intermediate passage along the route of a race; the first rider to cross it will not necessarily win the race, but will obtain bonus seconds, a particular prize and perhaps, as in the past, some typical local foods.
With this forceful and in some ways light-hearted image, the final stage of the route is reached, on the way to the definitive finish line. A race on two wheels and two legs to celebrate the centenary of a legend of Italian industry, Columbus, and the unique style and contemporary taste of Cinelli in the world of cycling.
In particular, the history of these two brands is connected to that of art, a bit like the split personality of Antonio Colombo, so to speak, an innovative entrepreneur with a focus on language, experimentation and aesthetics applied to functional quality, a collector and gallerist, a curious talent scout with one eye on his own country and the other trained on America, its dreams, music, streets, landscape and myriad of images.

The relationship between art and bicycles has distant roots, definitely extending back to the 1800s. A vehicle that does not consume energy but produces it, a synonym of lightness and freedom; it appealed greatly to the Futurists, and it accompanied the adventures of the neo-avant-gardes, from the Situationists to the Provos. The bicycle has also become a vehicle of style, starting in the 1980s, donning ultra-pop colors and guises, all the way to summing up the rebel spirit of new environmentalist activism. The bicycle as an extension of one’s own body.
A flying finish line, then, in a world made not only of champions, but also of many team players, people who work for others, has flashed by and then, perhaps, vanished from sight. A rule that applies to cycling, and also to art.

How should we conclude such an exciting adventure, without coming up short in relation to the pieces in the first two exhibitions of the Columbus Continuum cycle, the Bauhaus memorabilia and the bicycles of Moser or Pantani?
The gallery staff, Antonio and Luca Beatrice have chosen to work along three paths.
The first, inviting today’s artists to make one or more not exactly thematic works, focusing instead on bicycle frames, tubular and technological materials, speed and competition. Here’s the list, which for now includes both new entries and old friends: Ana Benaroya, Sam Binkow, Esteban Diacono, Futura 2000, Barry McGee, Gianni Piacentino, Russ Pope, Andy Rementer, Andrew Schoultz, Paolo Ventura, Zio Ziegler.
The second, for which Antonio Colombo has been asked to show some works from his own private collection, connected with the art-cycling theme: a painting by Salvo (who knew everything about cycling, and was able to recognize the most obscure individuals in a throng of hundreds), a very rare Maurizio Cattelan from the early days, and above all a work by Mario Schifano that particularly impressed the curator Luca Beatrice, who titled his essay in the catalogue in just those terms: “Anquetil is my chief, not you.”
The third was to explore the Columbus-Cinelli archives in search of curiosities, documents, artists’ bicycles, surprising objects. Fascinating and unique materials that will be inserted in the exhibit design created by Franco Raggi, which links back to the first two shows. In particular, after the theatrical display on the ground floor, amidst frames, works made for the occasion and memorabilia, three special sections on the lower level will retrace key moments to better understand these intersections that are only apparently outlandish. The formidable 1980s, with protagonists – among others – like Alchimia, Occhiomagico, Alessandro Mendini. The Italian artists who have accompanied the story of Antonio Colombo and his gallery, amidst love stories, passions and betrayals (hence Marco Cingolani, Massimo Giacon, Alessandro Pessoli). And finally America, the West Coast in particular, i.e. the line that prevails in the gallery’s research today (including Ryan Heska, Taxali, Coolrain, Mike Giant…).